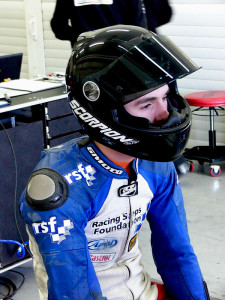 We asked John to answer a few questions to help tell new fans and followers of Moto3 a bit about him, who he is and how he approaches racing.
We’ll be doing more Q&As later in the season – and we’ll also be inviting you to ask him some questions during 2013 too – but for now here’s John’s take on himself and his career to date in 20 questions…

3. What are you most looking forward to in the coming 12 months?
Taking on the challenge

4. What do you try never to leave home without?
Phone

5. What’s the best advice (career or otherwise) you’ve ever been given?
Believe in yourself.

6. What do you do in your spare time?
Train, ride motocross, spend time with friends/family.

7. What makes you laugh?
A good sense of humour.

8. Who or what gave you the itch to compete in motorsport?
Dad and uncle mark.

9. What difference has the RSF’s backing made to you?
It’s made the impossible possible.

11. How do you prepare for races?
Physical training and mental focus.

12. What are you allowed to eat and drink?
Anything.. but I enjoy a healthy diet!

13. How did you cope with the transition from CEV to MotoGP?
Still in transition, and working hard at it!

14. What were the most important things you learned while riding with the KRP squad?
The more you put in the more you get back.

15. Describe the highs and lows of 2012?
Highs: 2 podiums in CEV, points in wildcards.. running 3rd at Brno.. And the lows: few bike issues which were hard to identify, especially in the last 5 GPs.

16. What are your goals for 2013?
To be running at the sharp end and learn as much as possible

17. Who is your all-time motorcycle racing hero?
John Surtees and Steve Hislop

18. Which present rider would you get the biggest buzz from racing against?
Bradley Smith

19. Describe the buzz that racing gives you:
It’s indescribable.. only other racers will understand the feeling.

20. If you weren’t racing motorcycles, what would you be doing?
Trying to race motorcycles.