John talks about his new team, new bike, and the first 2013 tests 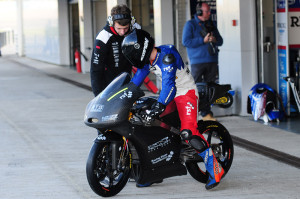 Both the first two pre-season test sessions in February – at Valencia and Jerez – were to a certain extent affected by weather, but nonetheless a good number of laps were done, setups explored, and data gathered, especially by the likes of John as he familiarised himself with his new bike, and indeed with his new team around him.

So, what did he make of the new bike? “It was a bit uncomfortable to begin with in Valencia as it felt quite different”, he says. “I needed some laps to get the feel of it. But now it feels good, more natural and I really feel at home with it. I’m sure as I build up the mileage there’s much more to come.”

As for working with the Racing Team Germany outfit, John says “I knew some of the guys as we’ve chatted in the paddock when I did some of my wild card rides last year. So it wasn’t all new to me but you do wonder switching teams how it’s all going to come together. We’ve only had the two tests at Valencia and Jerez and already it feels like I’ve been there for months. We’ve all just hit it off from day one.”

“They have a very methodical structured way of working, which suits me fine as I prefer to work in the same way, going through stuff step by step. They all speak English really well and know the right questions to ask to get to the bottom of things, so the communication is spot on. My dad has also joined the guys and works on my bike so that clearly helps.”

And its not only on a purely technical level that things are working out: “Aside from the work” says John, “they have a great sense of humour so we have some laughs which makes it all more enjoyable and can lighten things up if it gets a bit stessy when things aren’t going as planned!” 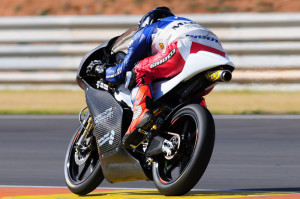 How did the testing go overall? John seems pretty comprehensively pleased and positive… “We covered loads at the two circuits with nearly two weeks together. It was always going to be a critical time, joining a new team, working with different guys knowing that we had to start off on the right foot for the whole of the rest of the season. But it all just happened and it feels like we’ve been together for ages.”

“We started steadily at Valencia, I know the track anyway from the CEV and wild cards I’ve done there so it was a good circuit to get to know the new bike. At the start of a new season when you haven’t been out on track for a long while over winter, you kind of wonder how quick you’ll get back into it, but it’s always a non-event and it’s like you’ve never been away. We had new parts arriving over the three days to fit and we tried quite a few different suspension settings to get a feel for things.”

“By the time we left at the end of the week I was feeling confident all was going to go really well this year. We then had a long drive across to Jerez and spent the weekend together before we started our second test together on the Monday. The weather in Jerez was quite cold and we had rain too so that gave us some different things to check out. I struggled a bit at one point as Jerez is a very different track to ride than Valencia. But in the end we sorted stuff and finished the sessions there in pretty good form. For first tests on a new bike with a new team all is good!”