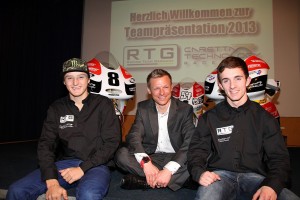 We had the Caretta Technology RTG launch at the Sachsenring circuit which is close to the teams workshops in Germany. It was a great opportunity to meet some of the press, TV and our sponsors. There were over 150 guests there for the evening presentation.

For the first time the bikes were prepared in the team colours with all the sponsor identity and they looked really smart. There will still be a few small changes as the final fairings are not yet confirmed, we’re trying to get as much advantage aerodynamically as possible. Small changes to the shape of the fairing can make a significant difference to the top speeds, and on the small Moto3 bikes every little helps!

Jack Miller, my team mate was there of course, and I met Max Kappler who’ll be running the German IDM Moto3 championship for RTG. We did some photo calls for the press so they have some shots of us individually and together as a team. One of the Sachsenring commentators interviewed each of us on stage, asking the usual sort of questions about our expectations for the coming season.

I don’t mind doing this kind of stuff; RSF gave us some media training over the last couple of years to help us prepare and say the right things. Standing up on stage in front of all those cameras can be a bit of a shock the first time. It’s the same in any job really, some training and practice always helps.

Team boss Dirk Heidolf introduced several of our team sponsors, he has been working with some of them for a very long time, since he was racing himself. The guys from our new team sponsor Caretta Technology came along; their company makes high tech water jet cutting equipment.

I met our new partner for leathers and tried on my suit for the first time. As these are all made to measure, it’s a bit like any suit and it sometimes needs some small adjustment so it fits well and feels really comfortable. I’m going to be spending a lot of time in it and need to be able to move about easily on the bike without feeling it pinching or restricting me. For the first fitting it was really good and comfortable. I look forward to trying it out at the next test now.

After the presentation there was great spread of hot and cold food for everyone and then a rock band kept everyone entertained. The hall we used was part of the Sachsenring Karting Centre and we managed to persuade them to let a few of us on track. As you can imagine it was probably not the best idea with a bunch of motorcycle racers on track at the same time! It ended up a very aggressive race with plenty of shoving and cutting each other up. And after, just as many excuses as to why each of us hadn’t managed to win.

So it was a good event and I flew back to Glasgow the following day, after visiting the workshop for some technical discussions.