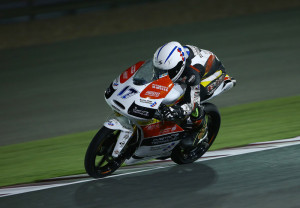 A crash caused by Alexis Masbou brought a sad and premature end to what had been a great race for John in the season opener in Qatar.

John crashed out on the penultimate lap of the Grand Prix when he was running 15th. He was taken out by Alexis Masbou on lap 17, who flew up the inside of John, while out of control, taking John’s front wheel from underneath him.

The resulting crash was a heavy impact but thankfully it did not result in any serious injury. Places 14-18 had been in race-long contention with Iwema, Fenati, Miller and Masbou all involved in the scrap.

John had just moved up to 15th when the incident occurred. RTG team-mate Miller just missed out on the final point in 16th.