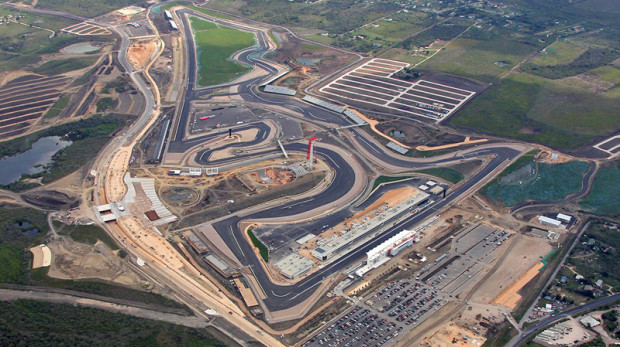 Following a grand opening spectacle in Qatar, the MotoGP™ grid descends for the first ever time on the recently build Circuit of the Americas for the Red Bull Grand Prix of the Americas to contest the second round of the 2013 campaign.

The season opener has created much buzz and anticipation ahead of the new race on the calendar, with Yamaha Factory Racing’s Jorge Lorenzo no doubt one of the favourites after his dominant display in in race one. He will however face a stiff challenge from teammate Valentino Rossi, who looked close to his old self as he carved his way through the field in Qatar, as well as Repsol Honda Team rookie Marc Márquez, whose terrific performance led to a podium in his first ever MotoGP™ race. His teammate Dani Pedrosa, who struggled with rear grip issues last time out, will nonetheless remain one of the biggest threats at the new circuit.

Both Factory Yamaha and Repsol Honda riders, as well as LCR Honda MotoGP’s Stefan Bradl, will line-up for the first practice on Friday with a slight advantage, as the five riders have completed a three-day private test at the track, which is the fourth circuit in the USA to ever host motorcycle Grand Prix racing. Bradl in particular will hope to benefit from this experience, as he looks to bounce back from a crash in the opening round. His satellite Honda counterpart, GO&FUN Honda Gresini’s Álvaro Bautista, will have fully recovered from his niggling finger injury, and will no doubt be looking to mix it up at the sharp end. All will face stiff competition from Monster Yamaha Tech 3’s Cal Crutchlow, who was very impressive in qualifying last time out, yet couldn’t quite match the performance in the race. His rookie teammate on the other hand, Bradley Smith, will aim to finish his first ever MotoGP race, following a crash in round one.

The Ducati Team showed promising signs in the first race, especially with Andrea Dovizioso’s qualifying performance, and will hope to build on that at the new track. Teammate Nicky Hayden will receive a boost from his home crowd, as will his Ignite Pramac Racing counterpart Ben Spies, who himself hails from Texas. Still struggling from a shoulder injury, Spies will be hoping to suffer less pain as he looks to put on a show for his fans, alongside rookie teammate Andrea Iannone on the Energy T.I. Pramac machine.

Also soaking up the local atmosphere will be NGM Mobile Forward Racing’s Colin Edwards, the Texas Tornado, as he looks to squeeze the most out of his new FTR-Kawasaki package with teammate Claudio Corti. Yet the CRT favourite will once again be Power Electronics Aspar’s Aleix Espargaró, who was on tremendous form in Qatar as he stormed into Q2 and ended as top CRT. His teammate Randy de Puniet will be hoping to challenge for that honour at the new circuit, whilst the other CRTs vying for a place in Texas’ Parc Fermé will be Cardion AB Motoracing’s Karel Abraham, PBM’s Yonny Hernandez and Michael Laverty, Came IodaRacing Project’s Danilo Petrucci and Lukas Pesek, GO&FUN Honda Gresini’s Bryan Staring, as well as Avintia Blusens’ Héctor Barberá and Hiroshi Aoyama.

The race will also see the inclusion of two wildcards in the form of Attack Performance Racing’s Blake Young, on the Kawasaki-powered in-house APR chassis, and GPTech’s Mike Barnes on a Suzuki-powered BCL chassis.

The Moto2™ contingent is set to descend on the Circuit of the Americas for the very first time at the Red Bull Grand Prix of the Americas this weekend, with Tuenti HP 40’s Pol Espargaró and Marc VDS Racing Team’s Scott Redding heading in as firm favourites after stunning performances in the opening round.

The Spanish and British duo scrapped it out in a close-fought affair in Qatar, with much hope that the trilling encounter will be repeated at the new Circuit of the Americas track. None of the Moto2™ riders have previously been to the circuit; hence the first few days will revolve heavily around learning the track. And as well as Espargaró and Redding, Italtrans Racing Team’s Takaaki Nakagami will be one to watch, as he impressed in his first outing in 2013.

Technomag carXpert’s Dominique Aegerter will be hoping to carry his impressive form through to Texas, as the Swiss rider put in a great performance for fourth last time out, whilst Redding’s teammate Mika Kallio will aim to carry through his qualifying feats into the race. Italtrans’ Julian Simón, who was one of the pace-setters in pre-season testing, could prove to be one of the podium contenders at the new track, whilst the likes of NGM Mobile Forward’s Simone Corsi and Alex de Angelis will remain a constant threat.

The Kalex bike proved the dominant machine in Qatar, apart from Aegerter’s Suter, yet the likes of Mapfre Aspar Team Moto2’s Nico Terol and Jordi Torres will look to take their testing form into Texas as they look to kick-start their 2013 season. JiR Moto2’s Mike di Meglio, who had looked promising on his MotoBI before an issue on the starting grid in Qatar, will be aiming for a better showing of true form, whilst the rookies in the shape of Dynavolt Intact GP’s Sandro Cortese and Tech 3 Racing’s Danny Kent and Louis Rossi will continue their adaptation to the class.

The Moto3™ class will look to pick up where it left off as it contests the Red Bull Grand Prix of the Americas this weekend for the very first time at the newly built Circuit of the Americas, with Red Bull KTM Ajo’s Luis Salom currently leading the charge.

In the class’ first race in its second only season the youngsters didn’t disappoint, as they once again put on a show in Qatar under the floodlights. And fans will be hoping for a repeat as the riders get to grips with the new and exciting track. Salom showed true composure last time out to take the win from a hard-fought battle, whilst the likes of Estrella Galicia 0,0’s Alex Rins and Alex Márquez will once again be challenging throughout.

Team Calvo’s Maverick Viñales, who is still recovering from loosing a fingertip in a crash in testing, will be further into his healing process, and will undoubtedly remain one of the favourites. Mapfre Aspar Team Moto3’s Jonas Folger, who looked to have struggled ever so slightly on his KTM-Kalex, will aim for at least a podium finish in Texas, whilst the Mahindra Racing duo of Miguel Oliveira and Efrén Vázquez will look to continue the team’s positive start to the season.

Honda-powered machines struggled at the fast and flowing Qatar track, and will be hoping that the varied nature of fast and slow at COTA will work more in their favour, with Ambrogio Racing’s Danny Webb and Brad Binder currently the favourites to shine on their Suter-Honda machines. Paddock TT Motion Events Newbie Philipp Oettl did well on his Moto3™ debut and will be looking for much of the same, as will other rookies such as Team Calvo’s Ana Carrasco and CIP Moto3’s Juanfran Guevara.

Hopefully John will continue his progress in the Moto3 class too, and we hope that following such a promising race being cut off by Alexis Masbou at Qatar, that John will be fighting for points again and that it will be a great weekend.