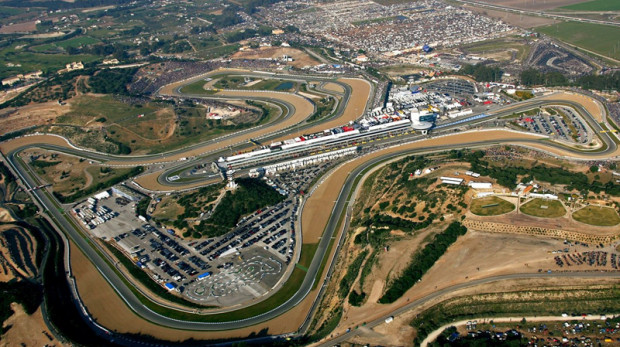 Following two thrilling opening rounds of the MotoGP™ World Championship, which has given a taste of the exciting season ahead, the grid now heads to Southern Spain to contest the Gran Premio bwin de España at the popular track in Jerez.

Yamaha Factory Racing’s Jorge Lorenzo, who endured one of his tougher races in recent times last time out in Texas, will be hoping to capitalize on the track’s layout, which should be more favourable to his Yamaha M1. However, all eyes will be on Repsol Honda Team’s young charger Marc Marquez, who two weekends ago became the youngest ever winner in the premier-class in only his second ever race. His teammate Dani Pedrosa, one of the pre-season favourites, will hope that his home support can rouse him sufficiently to record his first win of the season.

Monster Yamaha Tech 3’s Cal Crutchlow, who put in one of the rides of his career in Austin, will aim to continue his podium charge, whilst competing with Yamaha’s Valentino Rossi. Rossi, who suffered an issue with a chipped brake-disc in Texas, will be one to watch, as he looks for the kind of form that put him back on the map in Qatar. LCR Honda MotoGP’s Stefan Bradl has looked continuously fast in both preceding race weekends, yet will be hoping to challenge the top riders a bit closer, whilst GO&FUN Honda Gresini’s Alvaro Bautista aims to overcome the set-up issues that hampered his charge in the US.

Tech 3’s rookie Bradley Smith, like many others, is much more familiar with the Jerez track, which should see him climb up the rankings as he squeezes the most out of his M1, no doubt looking to battle with top Ducati Team duo Andrea Dovizioso and Nicky Hayden. Ducati will be buoyed by the fact that during testing at the circuit they had Michele Pirro running a full test schedule with three separate Desmosedicis, perhaps leading to a jump in form. Pirro will also be taking part in the race as a wildcard. Energy T.I. Pramac Racing’s Andrea Iannone will be the only lining up for the team, as Ignite Pramac’s Ben Spies misses out due to reoccurring injury issues – a trapped nerve in Texas – from his previous shoulder injury.

The CRT field has a big task on its hands as it challenges the current dominance of Power Electronics Aspar’s Aleix Espargaro, who has also been beating some of the prototypes so far. His teammate Randy de Puniet is edging ever closer, whilst NGM Mobile Forward Racing’s Colin Edwards will hope to overcome his disappointment from retiring in his home race in Texas. His teammate Claudio Corti will aim to do battle with the impressive looking Yonny Hernandez on his PBM ART, his teammate Michael Laverty on the PBM machine, Avintia Blusens’ Hiroshi Aoyama and Hector Barbera, as well as Gresini’s Bryan Staring. Came IodaRacing Project’s Lukas Pesek and Danilo Petrucci will hope for a turnaround in fortunes after a crash and retirement respectively in Austin. Cardion AB Motorracing’s Karel Abraham will not take part, as he sustained a broken collarbone after a crash in Texas, which an estimated healing time of three to four weeks. He should be fit for the following race in Le Mans.

As the Moto2™ contingent heads back across the Atlantic to contest the Gran Premio bwin de España this weekend in Jerez it is tough to predict any favourite from the group that has proven itself full of contenders after the first two outings.

Mapfre Aspar Team Moto2’s Nico Terol, fresh from his maiden intermediate-class victory in Austin, will aim to carry that form through to one of his native tracks, though will undoubtedly be facing stiff competition from Tuenti HP 40 compatriots Pol Espargaro and Esteve Rabat.

Marc VDS Racing Team’s Mika Kallio, who fought his way to a podium last time out, will hope for much of the same in Spain, whilst his teammate Scott Redding, last race’s pole-sitter, will look to carry his outright pace through race distance. Technomag carXpert’s Dominique Aegerter has been a solid performer so far, finishing fourth in both races, and will be a thorn in the established top-runners’ side, as will Came IodaRacing Project’s Johann Zarco.

The NGM Mobile Forward Racing team is always one to watch, particularly as their Speed Up bikes showed great top speeds so far. Mattia Pasini did well to finish eighth in Austin, ahead of teammate Alex de Angelis, while Simone Corsi almost always proves a threat as well. QMMF Racing’s Ant West will hope to capitalise on his good form so far, along with the likes of JiR Moto2’s Mike di Meglio, Blusens Avintia’s Toni Elias, Desguaces La Torre SAG’s Marcel Schrotter and teammate Xavier Simeon on the Desguaces La Torre Maptaq machine.

There will be a big fight on the Moto3™ riders’ hands as many will try to avoid and all Spanish affair as they line up for the Gran Premio bwin de España in Jerez this weekend.

Estrella Galicia 0,0’s Alex Rins, Team Calvo’s Maverick Viñales and Red Bull KTM Ajo’s Luis Salom all head into their home race favourites, after dominating proceedings last time out in Austin. Mapfre Aspar Team Moto2’s Jonas Folger will however have something to say about that, as he looks to get himself and his Kalex KTM back onto the podium.

Mahindra Racing will be aiming to continue the strong run of form it has had, with Miguel Oliveira doing very well on the relatively new machinery to come fifth last time out. His teammate Efren Vazquez on the other hand will be hoping to soak up home support to make up for a disappointing race in Austin by his standards.

John McPhee will be hoping for better things at Jerez – after difficult experiences at both Austin and Qatar.

John’s Racing Team Germany teammate Jack Miller put on a good show in Texas, and will aim to bring his Honda-powered FTR close to the front once more, whilst fellow Australian Arthur Sissis on the Red Bull KTM Ajo bike looks to improve on his 12th place in last race – albeit he was suffering from a slightly injured right wrist. His teammate Zulfahmi Khairuddin did well to finish seventh in the US, but the podium will once again be his aim in Spain.

The Moto3™ field also welcomes Marc VDS Racing Team’s Livio Loi this weekend, as he makes his debut in the World Championship after reaching the minimum age of 16. He looked strong in pre-season testing in Jerez, and will no doubt be hoping for a successful debut. Two wildcards will be taking part in the form of Thomas Sabo GP Team’s Kevin Hanus of Germany, and Spanish rider Jorge Navarro on board an MIR Racing machine.