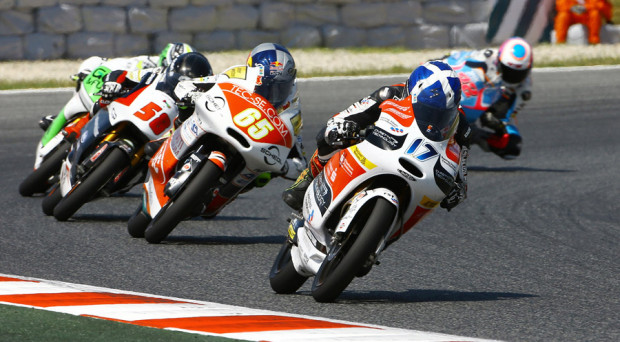 John McPhee was fighting all the way in today’s Gran Premi Aperol de Catalunya at the Montmelo circuit, near Barcelona.

Starting from 20th position on the grid, John was pretty much constantly in amongst a tight and battling midfield group, having been dropped from an encouraging 15th spot early on back to 23rd – occasionally moving up a position or two and finally finishing in 19th.

John said:
“I had a good battle. I got through the first few corners pretty good and was up to P15 by turn 3. Then unfortunately got run wide by another rider and dropped back to 23rd. The rest of the race I spent in a 4 way battle and it was too difficult to break the group. I am looking forward to Assen and hope to improve the result.”

Luis Salom won the race to take the lead in the Moto3 World Championship. The Red Bull KTM Ajo rider carried out a well-judged race, saving tyres before hitting the front in the closing stages. Alex Rins and Maverick Viñales completed the podium as the top five places were filled by Spaniards.