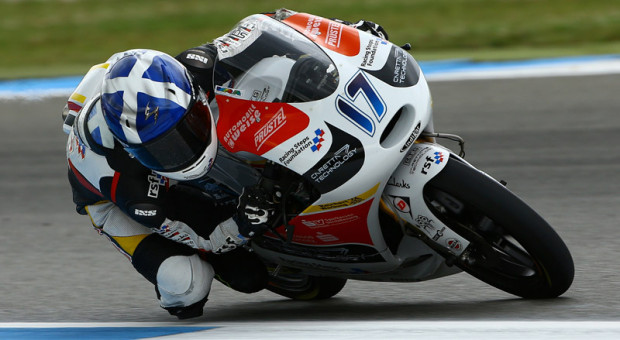 John McPhee finished today’s Dutch TT at Assen in a creditable 21st place, having started from 24th on the grid.

Immediately after the start John became part of a large and hard-fought group that dominated the Moto3 class midfield and took in positions from 10 back to the early twenties.

In the opening laps John occupied positions in the late teens but by lap 18 had moved up to 12th position following plenty of battling with the likes of South Africa’s Brad Binder, and got as high as tenth before being shuffled down the order in the closing minutes to finally come in 21st.

It was a performance that left the young Scot justifiably optimistic for the next race, the German GP at the Sachsenring on July 14th.

John said, “I was really happy with the feeling from the bike. I was able to stay with the group without too much difficulty and I felt like I was stronger in some areas. It was difficult with such a poor qualifying position but I now know whats possible and will be working hard to improve my result at the next race!”