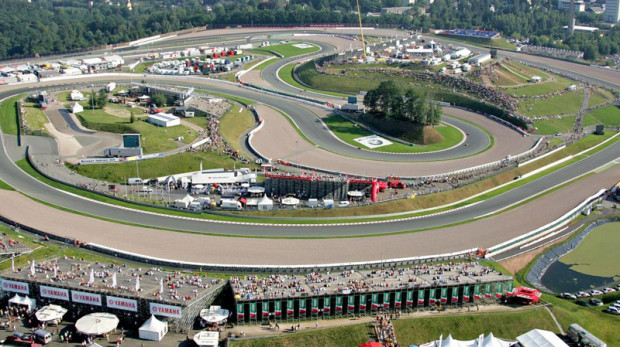 Following a breath-taking round of MotoGP™ racing in Assen last weekend, riders, teams and fans are braced for the next onslaught of adrenaline-packed action as the grid descends on Germany’s Sachsenring for round eight of the world championship at the eni Motorrad Grand Prix Deutschland.

Based on history alone, Repsol Honda Team’s Dani Pedrosa should be heading in as the hot favourite, having won not only the last three times here, but six times in his whole career. And following a slightly difficult Assen race for the Spaniard, he will be hoping this winning trend continues, as he looks to extend his lead in the championship. His main challenger, in the form of Yamaha Factory Racing’s Jorge Lorenzo, can arguably not upstage his incredible last race, where only two days after breaking his left collarbone he came back to finish fifth in the race.

His doctors have told him that no further damage occurred in the race and that he is fit to contest at the Sachsenring. Yet how much pain he will be in at the small but fast track remains to be seen. One thing he can probably count on is his resurgent teammate Valentino Rossi to help him challenge the Hondas, with the Italian scoring his first win since coming back to Yamaha in emphatic manner last time out in Holland. An improvement in front-end feel has seemingly helped Rossi re-discover some old form, which no doubt he will aim to show once more at the Sachsenring.

The podium challenge is made even more exciting with Repsol’s Marc Marquez and Monster Yamaha Tech3’s Cal Crutchlow in superb form, with both making it onto the podium last time out. Crutchlow is still looking to overcome a lack of pace in the early laps, which the Brit believes is the last hurdle to his first ever GP race win. His teammate Bradley Smith, as well as other satellite riders, LCR Honda MotoGP’s Stefan Bradl and GO&FUN Honda Gresini’s Alvaro Bautista, will hope for a better race this time out – in particular Bradl, as he aims to please his home crowd.

Also seeking a marked improvement will be Ducati Team riders Nicky Hayden and Andrea Dovizioso after a disastrous weekend in Holland, whilst Energy T.I. Pramac Racing’s Andrea Iannone will aim for the same. His teammate Ben Spies is unfortunately still absent due to his on-going shoulder injury problems, and will once again be replaced by Ducati test rider Michele Pirro. One of Ducati’s aims will be to finish ahead of Power Electronics Aspar’s Aleix Espargaro, who looks unstoppable as top CRT so far.

And with the immediate abolition of the CRT rule for teams running Magneti Marelli software after the Assen, his “top CRT” competition is significantly reduced, as only the ARTs and Gresini’s FTR-Honda run different software. However this is only in “principle”, as the make-up of the bikes still classifies them as non-prototype entries, meaning they will still be fighting for their very own top spot that sees them as the fourth bike in Parc Fermé after the race.

None of the riders on non-prototype machinery have beaten him to Parc Fermé in the first seven races this year, though the likes of teammate Randy de Puniet or Avintia Blusens’ Hector Barbera are potential challengers. Avintia’s Hiroshi Aoyama is substituted by Ivan Silva, as the Japanese rider still recovers from a bad finger injury sustained in Catalunya. The other non-prototypes contesting the race will be NGM Mobile Forward Racing’s Colin Edwards and Claudio Corti, PBM duo Yonny Hernandez and Michael Laverty, Came IodaRacing Project’s Danilo Petrucci and Lukas Pesek, Gresini’s Bryan Staring, as well as Cardion AB Motoracing’s Karel Abraham.

The entire Moto2™ grid will be poised for a tough race at the eni Motorrad Grand Prix Deutschland at the Sachsenring this weekend, as it aims to challenge the front-runners in the shape of Marc VDS Racing Team’s Scott Redding and Tuenti HP 40’s Pol Espargaro.

Redding currently holds a 30-point lead over Espargaro in the standings, yet it is the Spaniard who has triumphed in the last two rounds after overcoming his early-season slump. He needs to fight for the win if he is to stand a chance of winning the title, whilst Redding will undoubtedly be battling to defend his lead.

Espargaro’s teammate Esteve Rabat lies further back in third, with Marc VDS’ Mika Kallio just behind, with both looking to make up for their missed podium last time out in Assen. The big winner in that battle was Technomag carXpert’s Dominique Aegerter, who will aim to take his third-ever career podium at the German track. And with only one point separating him from Kallio he will need no extra motivation.

Came IodaRacing Project’s Johann Zarco, who did well to start from the first row last time out, will be another one to watch as he continues to improve on his Suter, whilst Mapfre Aspar Team Moto2’s Nico Terol will be hoping to overcome his disappointing race last time out and return to winning ways.

Desguaces La Torre Maptaq’s Xavier Simeon and Interwetten-Paddock’s Tom Luthi will most likely be in the mix, whilst Italtrans Racing Team’s usual contender Takaaki Nakagami may struggle as he recovers from a broken left collarbone sustained at Assen. Gino Rea will once again line up as a wildcard at the Sachsenring with his own Gino Rea race team, along with other wildcard Alex Marinelarena for Targobank Motorsport.

Red Bull KTM Ajo’s Luis Salom may be in the lead by ten points heading into this weekend’s Moto3™ race at the eni Motorrad Grand Prix Deutschland at the Sachsenring, yet will face stiff competition once more from Team Calvo’s Maverick Viñales and Estrella Galicia 0,0’s Alex Rins.

Salom will be brimming with confidence after taking the win in Assen after a bold move in the final turns, whilst Viñales will be looking to take revenge and be the victor once more. Rins has not been on the top step since Austin, and will aim to change that after repeatedly being in the top three.

Mapfre Aspar Team Moto3’s Jonas Folger has now fully recovered from his fractured wrist and will look to break into the top three, which he has scarcely managed this year on his Kalex KTM, albeit showing great outright pace. Rins’ teammate Alex Marquez will be a constant contender, whilst Mahindra Racing’s Miguel Oliveira will aim to build on his fantastic pole position last time out in Assen.

Ongetta-Rivacold’s Alexis Masbou has perhaps been an overlooked performer, as the Frenchman sits seventh in the championship after some strong results. He got his only podium in Germany last year, and will be one to look out for. Ambrogio Racing’s Danny Kent will unfortunately be absent after breaking his wrist in Holland, while the grid welcomes two wildcards in the form of German Luca Amato with Mahindra and Thomas Sabo GP Team’s Kevin Hanus.