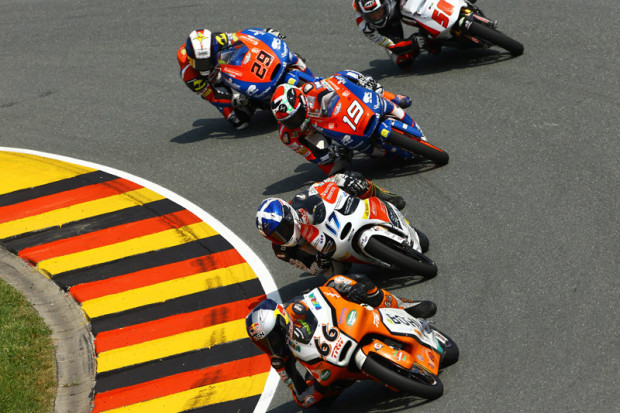 Having qualified 19th, John’s chances of a solid points haul in the German GP were scuppered after an unfortunate run-on at Turn 1 on the second lap, which dropped him to 34th (last) place.

From there on he made a determined fightback into a midfield eight-rider scrap behind Kiefer’s Toni Finsterbusch in 20th with constant reshuffling of the group’s order making it nigh on impossible to make further progress, eventually finishing the race in 23rd place.

John looked back on the GP saying, “The race for me was quite difficult. I ran off track on lap two and was in completely last place! I fought hard and managed to get back up to 23rd but it was difficult as everyones lap times were so close. The bike was feeling really good and the team worked hard all weekend! I now look forward to Indianapolis.”

The Moto3 (and Moto2) classes now take a break – the MotoGP top class alone run at Laguna Seca – and John will next be back in action racing at the Indianapolis GP on August 18th (practice sessions start on Friday 16th).