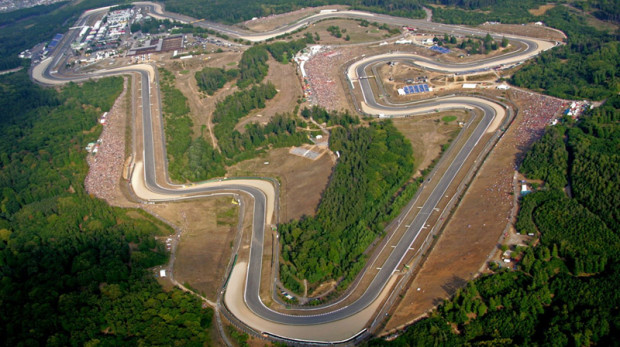 Following a great race in Indianapolis filled with excitement, the MotoGP™ grid packed its bags and is heading straight to Brno in the Czech Republic to contest this weekend’s bwin Grand Prix České republiky.

And seeing the tremendous form Repsol Honda Team’s championship leading rookie Marc Marquez is in after his sensational win in Indianapolis last time out, all eyes will be on the Spanish youngster once more as he takes to the popular Czech circuit for the first time on a MotoGP™ bike. His teammate and main rival in the title race, Dani Pedrosa, also put in a great showing, and will be one week further into the healing process from his broken collarbone sustained in Germany.

Yamaha Factory Racing’s Jorge Lorenzo, also recuperating well, will hope to get back to winning ways at the fast and flowing track, which might be helped by the mid-summer test he and teammate Valentino Rossi carried out at the Brno track a few weeks ago. Rossi will aim to have a better weekend than last at the circuit where he took his first ever world championship win, whilst Monster Yamaha Tech 3’s Cal Crutchlow will be buoyed by the fact that he took his first GP podium there last year.

GO&FUN Honda Gresini’s Alvaro Bautista’s current form sees him heading into the race with optimism, whilst LCR Honda MotoGP’s Stefan Bradl will look to get back to the pace that saw him take his first podium in Laguna Seca last month. Tech 3’s Bradley Smith showed great glimpses of form in Indianapolis, going as high as fourth at one point, giving the British youngster good confidence to once again battle it out with Ducati Team’s Nicky Hayden and Andrea Dovizioso, who had a spectacular coming together at the final corner last time out.

Ignite Pramac Racing will be without the injured Ben Spies, who will be replaced by Ducati Team test rider Michele Pirro, alongside Energy T.I. Pramac Racing’s Andrea Iannone. Heading up the CRTs will once again be Power Electronics Aspar’s Aleix Espargaro, who continues to impress on board the ART, whilst his teammate Randy de Puniet will be looking to make up for the disappointment of having to retire from the last race.

NGM Mobile Forward Racing’s Colin Edwards will be another one to watch closely, whilst Cardion AB Motoracing’s Karel Abraham should be back in action in front of his home fans after missing Indianapolis through injury. The rest of the CRT grid will be joined by wildcard Martin Bauer with the Remus Racing Team on a Suter BMW machine – the first time an Austrian squad will compete in the premier-class.

As the Moto2™ grid heads back to Europe for the bwin Grand Prix České republiky in Brno, the attention will be firmly placed on the on-going battle between championship contenders Scott Redding and Pol Espargaro.

Despite Marc VDS Racing Team’s Redding coming third and Tuenti HP 40’s Espargaro fourth last time out, their battles in both qualifying and the race made the headlines and continue to create anticipation. However it is not only that pair that is shaking things up in the intermediate class, as Espargaro’s teammate and last race winner Esteve Rabat is in great form, having taken his second win this season and put himself back into championship contention.

Italtrans Racing Team’s Takaaki Nakagami, who led for big parts of the Indianapolis race and held his nerve to grab another podium, will be aiming to convert some of his outright pace into a first race win, whilst the charging Dominique Aegerter on his carXpert Technomag bike will be looking to get onto the podium once more this season.

Gino Rea lines up once again as a wildcard this year with his Gino Rea Race Team FTR, whilst Spanish rider Dani Rivas comes in as a permanent replacement for Brit Kyle Smith in the Blusens Avintia Team. Frenchman Lucas Mahias is the second wildcard rider with the Prosport Moto outfit.

The Moto3™ contingent gets right back to work this weekend at the bwin Grand Prix České republiky in Brno, where the young chargers in the lightweight class will get back to the fierce racing that makes it such a popular and competitive class.

Red Bull KTM Ajo’s championship leader Luis Salom will be hoping for a quick healing process as he overcomes injuries to his ankle that saw him battle to a brave fifth in Indianapolis last time out. He will need to be on form, as it is Estrella Galicia 0,0’s Alex Rins who is currently the man on song and challenging for the lead, after taking the last two wins in the series.

His teammate Alex Marquez could be one to look out for after starting his world championship podium tally last time out, whilst Team Calvo’s Maverick Viñales remains a continuous threat and a constant podium challenger. Mapfre Aspar Team Moto3’s Jonas Folger is an ever-looming threat to the podium, and will be aiming to find that little extra pace to be back on the rostrum.

Caretta Technology – RTG’s Jack Miller’s will struggle to make the race after suffering a broken right collarbone in Indianapolis, whilst the grid will see one permanent replacement for Ambrogio Racing’s Danny Webb in the form of German Luca Amato. The race has two wildcard riders, with Jules Danilo lining up for the Marc VDS Racing Team, and Italian Andrea Migno for GMT Racing on an FTR.