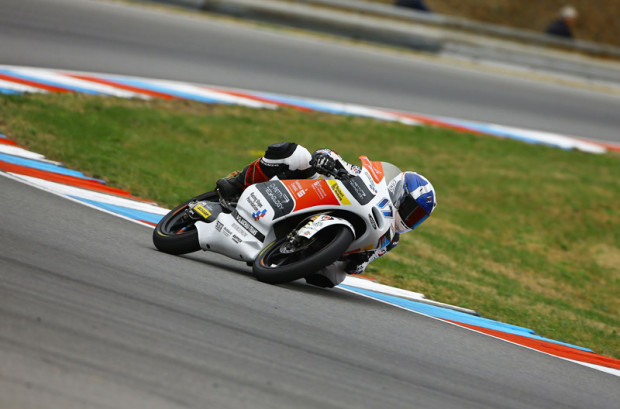 John McPhee kick-started the second half of his Moto3 Grand Prix season with 13th place at Brno after a race-long battle for a top 10 finish.

John – still recovering from the mystery illness that plagued him at Indianapolis – locked onto the rear of the lead group at the start to join a feisty five-way fight for sixth involving team-mate Jack Miller.

The RTG duo – benefiting from a team decision to run the soft rear tyre – led the battle over the opening six laps with Miller soon forging ahead to join the scrap for fifth.
But by mid-distance John, struggling with tyre degradation, was starting to slip back.

The early battle for sixth became a dogged battle for seventh and eighth which Miller inevitably got sucked into in the later stages as his rear rubber also began to fade.
But while Miller was able to hang onto seventh, John lost his grip on eighth with three laps to go as Mahindra’s Miguel Oliveira, followed by Jakub Kornfeil, made moves stick to demote the helpless RTG rider to 10th.

When Efren Vazquez, Niccolo Antonelli, and finally Alessandro Tonucci, followed through over the remaining laps, McPhee was left to cross the line in 13th.

“Clearly me and Jack were the only ones on the grid on the soft tyre,” said John. “And on balance it was it was definitely the right one to run.
“There’s no way we could have achieved what we did on the medium.
“For the first eight laps it was probably one of the easiest races I’ve ever had because the bike was good and the front guys were so clean and fair.
“But then, unfortunately, I had the rear tyre starting to go off and dropped back.
“Hopefully we can carry the same level of performance over to Silverstone for the British Grand Prix – but without the end-of-race tail off.”