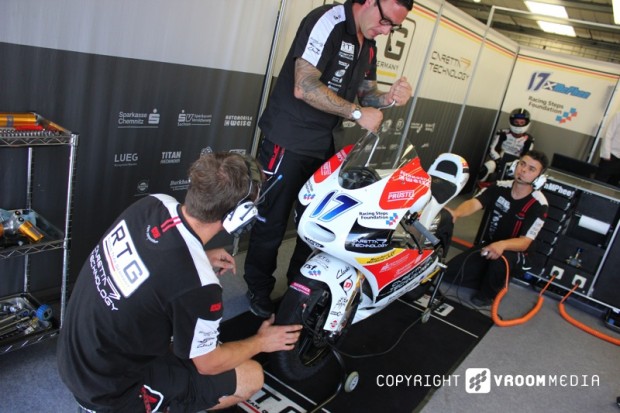 With 17th place for Jack Miller and 26th place for John McPhee after the first practice session, both Caretta Technology – RTG riders stayed well below their capabilities. This confirmed the suspicion that the Hondas will struggle on this track where a lot of engine power is needed.

But in the afternoon the team could breathe a little sigh of relief. The Australian Jack Miller topped the ranking straight away, dropped back a little bit though as the session progressed and positioned himself in 9th place in the end.

Also John McPhee, for whom Silverstone is his home GP, could in the end achieve a 17th place. Compared to the morning session, both riders therefore clearly improved during the afternoon. Though for tomorrow’s qualifying they’ll need to produce a lot more to secure themselves a good position on the starting grid.

John McPhee:
“We made a step forward in the second session. I got a better feeling compared to free practice one. In some corners I still have problems. I have this bouncing from the front. So I can not hold the bike. After we made this better, I had problems with the brake. We have to find a compromise for tomorrow.”

Dirk Heidolf:
“I think we can be satisfied with how the day panned out. But we know we have to work a lot harder still and produce a better result tomorrow. We tested and tried many different things today. At this track it’s very important that we try to use the slip stream, the guys have to tuck in on the bike as much as they can. Jack showed again that he can keep up with the top of the field despite the pain from his collarbone. John’s feeling a little more pressure with it being his home GP. There are a lot of people who are expecting a lot of him, he’s not quite as relaxed as he was in Brno. We’re fitting new engines on both bikes now and we’ll see what happens.”