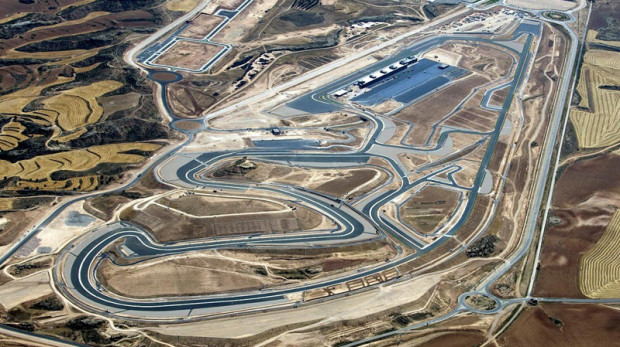 Yamaha Factory Racing’s Jorge Lorenzo will once again be taking the fight to Repsol Honda Team’s championship leader Marc Marquez, as he keeps trying to chip away at the rookie’s 34-point lead. And the stage for this will see both riders in front of their home crowd at the Gran Premio IVECO de Aragon in Spain.

Lorenzo has been the victor in the last two races, with Marquez however still keeping a tight grip on the championship by finishing a strong second on both occasions. The Yamaha rider knows his only option to retain the world title is to try and win all of the remaining races, yet Marquez will be no easy challenge, considering the form he’s in.

Looking to overhaul both is Repsol Honda’s Dani Pedrosa, who has been just slightly off the mark recently, citing grip issues. Yet back to match fitness and on a track he won at last year, Pedrosa will still be one of the favourites for victory. Valentino Rossi will be aiming to end his run of fourth-place finishes with another podium, after seemingly finding a better solution to his braking stability problems at the post-Misano test.

Monster Yamaha Tech3’s Cal Crutchlow will hope to get back to his form from earlier in the season that saw him on the podium numerous times, whilst GO&FUN Honda Gresini’s Alvaro Bautista and LCR Honda MotoGP’s Stefan Bradl will look to take the fight to the factory riders once more. A notable change in the ranks is that Yonny Hernandez, who has ridden for PBM this season, will contest the race on Ben Spies’ Ignite Pramac Ducati – the American still out due to injury.

The Ducati Team, which had a double podium in Aragon back in 2010, would very much like to replicate such a performance, though is likely to struggle for such a result following the team’s current run. Nonetheless, riders Andrea Dovizioso and Nicky Hayden will be looking to squeeze the maximum out of the Desmosedici and battle with the satellite Yamahas and Hondas.

Sadly, Cardion AB Motoracing rider Karel Abraham will be out for the rest of the season due to his damaged shoulder, which is being operated on. He will be replaced by Italian rider Luca Scassa. Elsewhere in the CRT field, Power Electronics Aspar’s Aleix Espargaro aims to make up for his jump-start last time out in Misano and once again take top CRT spot in Parc Ferme, which went to NGM Mobile Forward Racing’s Colin Edwards in San Marino.

The Moto2™ contingent will recommence battle at the Gran Premio IVECO de Aragon in Spain this weekend, with all eyes on Tuenti HP 40’s Pol Espargaro as he chases down championship leader Scott Redding.

Marc VDS Racing’s Redding still has a 23-point gap to Espargaro at the top, though will be looking to improve over his Misano performance, which saw the Brit struggle somewhat on his Kalex. This was partly due to “arm pump” in his right forearm, formally known as compartment syndrome, which he has since had surgery on. He will be able to race in Aragon, though will not be at 100 per cent fitness. Espargaro on the other hand looks to have found some race-craft and arguably some patience, as he stalked Takaaki Nakagami until the final laps to then take the win last time out.

Italtrans Racing Team’s Nakagami has looked in great form of late, and has backed this up with a run of podiums. However, the Japanese rider will hope to finally get onto the top spot of the podium in Aragon this weekend. Espargaro’s teammate Esteve Rabat will continue to be a constant threat at the top, whilst Came IodaRacing’s Johann Zarco and Interwetten-Paddock’s Tom Luthi have also looked in menacing form recently.

Gino Rea will line up as a wildcard in the class once more with his Gino Rea Montaze Broz Racing team, whilst Roman Ramos continues to replace the injured Mike di Meglio in the JiR Moto2 team. Blusens Avintia’s Dani Rivas, who is suspended from the next to races for the crash he caused in Silverstone Warm-up, will be replaced by compatriot Alex Marinelarena.

With Spaniards almost the norm atop the podium in the Moto3™ class, this weekend’s Gran Premio IVECO de Aragon should prove a feisty affair, as Luis Salom, Maverick Viñales, Alex Rins and Alex Marquez all aim to come out on top in front of their home crowd.

Red Bull KTM Ajo’s Salom still leads the championship by 19 points, yet with Team Calvo’s Viñales out-pointing him last time out in Misano, Salom will look to stop his rival’s catch-up. Yet throw the Estrella Galicia 0,0 riders of Rins, the San Marino race winner, and Marquez into the equation, and the race promises to be an exciting one.

But an all-Spanish podium is by no means certain, as the likes of Mahindra Racing’s Miguel Oliveira and Caretta Technology – RTG’s Jack Miller are proving a constant threat to the front-runners. The most likely to challenger had been Mapfre Aspar’s Jonas Folger, until he sustained a fracture to the left tibial malleolus in the Misano race. He has undergone surgery and hopes to be able to race in Aragon.

The weekend will also see two females line up on the Moto3™ grid, as Team Calvo’s regular entry Ana Carrasco is joined by wildcard Maria Herrera Muñoz with the Junior Team Estrella Galicia 0,0 team. She currently lies third in the Spanish CEV Repsol championship and clinched her second victory of the season yesterday at Circuito de Navarra. There will be another wildcard in the form of Dutchman Bryan Schouten from the Dutch Racing Team who lies second in the CEV Repsol.