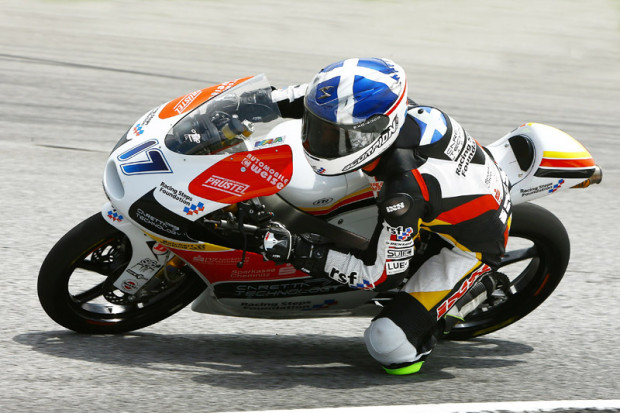 The majority of riders in the Moto3 field found themselves in tight groups for the duration of the 23-lap race, affected by light rain on certain parts of the newly resurfaced circuit.

John ran as high as 7th in the opening laps. In the thick of an eight to nine-rider battle for 10th, he was shuffled back to 16th on lap 9 – thereafter battling for one of the final points-paying finishes. Ninth to 17th positions were covered by a mere 1.8s. Clearly John was much happier with the bike even on a tricky day like today now that RTG accepts he prefers to ride with a softer front end.

Alex Rins eventually won the race, coming out on top of a multiple-rider battle to beat Maverick Viñales by just three thousandths of a second. Both riders decreased the championship-leading advantage of pole-sitter Luis Salom, who completed the podium at Phillip Island.

John McPhee
“I was hoping for a better finish in the race today after a fairly strong weekend overall, but despite the 17th position I ended only 1 second behind 9th position and 16 seconds off the win! I’m getting closer every race, and I’ll be aiming to improve again for Japan next weekend.”