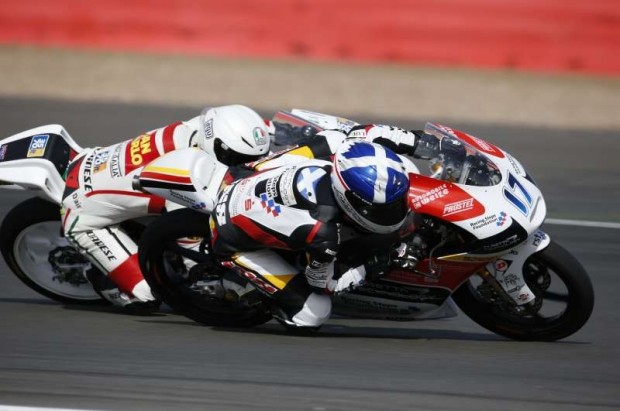 Caretta Technology-RTG’s John McPhee delivered his best Grand Prix ride to date battling through from 22nd on the grid to finish seventh in the Japanese Grand Prix Moto3 race at Motegi today.

It was the Scot’s highest-placed finish since stepping up to the World Championship as a wildcard entry in the predecessor 125cc class at Valencia in 2010.

The Racing Steps Foundation-backed rider made a strong start to break into the top 10 by lap five from where he worked his way up to eighth at the mid-way point to join what was to become an ultra-tight battle for fifth place as the race drew to a close.

Red Bull Ajo’s points leader Luis Salom was long out of the running by that stage having been taken out at the first corner by Ongetta-Centro’s Isaac Vinales before high-siding out of contention eight laps later while making his way back through the field.

Sandwiched in between the lead group and the Miller-led pack behind was the strung-out pair of Jonas Folger (Mapfre Aspar) and Miguel Oliveira (Mahindra) who trailed third-placed Rins by over three and 10 seconds respectively.

That left the following pack squabbling over sixth with Masbou in charge as McPhee and Miller traded places ahead of Fenati.
But with four laps to go the squabble for sixth became a fight for fifth as Rins – who looked set to take over at the top of the standings – made a rare error and dropped to the back of the field and out of the points.

In the end Fenati settled the dispute for the place jumping Miller and McPhee after Masbou crashed on the final lap. The trio finished just over a tenth of a second apart 18 seconds in arrears of race-winner Marquez.

The Spaniard took the flag by just two-hundredths of a second from Maverick Vinales to claim his maiden Grand Prix Moto3 win. Folger followed on a further seven seconds behind to secure the final podium place eight seconds clear of Folger in fourth.

The dramatic events at Motegi take what is now a three-way title race down to the wire at the season finale at Valencia in two weeks’ time with a win for Salom, Vinales or Rins being enough to lift the crown.