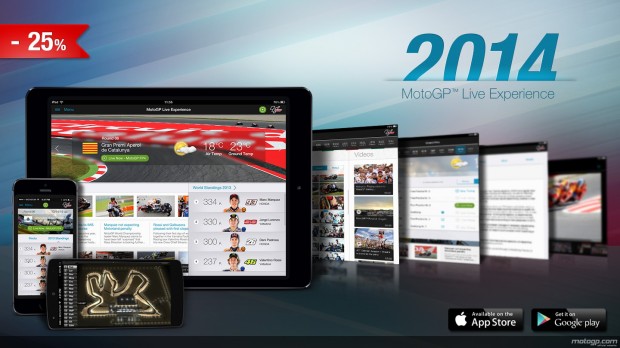 The MotoGP™ Live Experience App has been completely redesigned for 2014, with a new interface, new functionality, enhanced Live Timing, extra content throughout the winter and additional languages – plus the major added bonus feature of video highlights from every session and race – providing all the best content from every Grand Prix.

Available now on the iTunes App Store for iOS devices and on Google Play, for Android devices, the MotoGP™ Live Experience app is also the only official app which provides Live Audio Commentary, Live Timing and Live 3D Tracking of all the action from every round of the World Championship. The app is currently available with a 25% discount, providing extensive preseason content.

Key features include enhanced Live Timing for 2014, allowing fans to track the progress of each rider via split times and sector progress in most detailed timing analysis tool ever provided in MotoGP™ and real-time Tracking, following the riders around the track on enhanced and interactive 2014 circuit maps.

Video content includes in-depth preseason coverage and the best moments of every session and race from all three classes of Grand Prix competition from every round of the World Championship, shortly after the action has concluded. Video coverage also includes highlights, post race interviews, previews and rewinds of each Grand Prix and paddock girls clips.

Using the MotoGP™ Live Experience App, you can be the first to get all the latest preseason news, plus updates during race weekends and between Grands Prix throughout the 2014 season, with exclusive content and more than 200 new photos per race weekend.

Expert analysis via Live Audio Commentary from the motogp.com commentary team, and Live Text Commentary will keep you up-to-date with all the key moments of each session and race.

Check out all the statistics and information about the events, riders and teams (available soon) for the 2014 MotoGP™ World Championship via the MotoGP™ Guide.

Available in English, French, German, Italian, Spanish and Portuguese for iOS devices on the iTunes App Store and for Android devices on Google Play.