One of the things we’re looking forward to again this coming season is seeing John’s high impact design helmet – without doubt one of the cleanest, coolest designs on the Moto3 grid. Whereas many helmets in many championships these days are extremely complex, John has chosen a simple, clear, Scottish themed design which he has sported since entering MotoGP fully in 2013.

The use of the Saltire (or St Andrew’s Cross) – the national flag of Scotland – works well as a design theme anyway, but the execution of the design is also expertly handled: it’s in motion, waving and rippling in the wind across the top of the helmet as if the speed of riding is blowing it around. It’s a great, almost 3D effect and designed in a highly visual, impactful way that looks great on photos and is easy to spot on TV.

The idea of the design – not only the Saltire, but also the inclusion of a thistle icon on the rear of the helmet, an icon John has used for some time now – came from John himself, and it was a specialist company, Bike Paints, based in Cupar Muir near Fife, who realised the work. 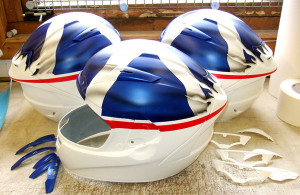 Bike Paints have been going since 1988 and have a huge amount of experience in helmet design and painting, and so were ideal partners to work on John’s lid.
“John supplied the concept of the design he was looking for along with all his sponsors requirements, all that was left for us to do was plan out the sizes and spacing available for each aspect of the design.” Says Deirdre Grant of Bike Paints. “This is not always the case though, and often we are given carte blanche with only some verbal ideas or guidance from the customer – but here we had a good clear idea to work with.”

Having seen the design, Bike Paints set about bringing it to life on a series of helmets supplied by John’s helmet supplier Scorpion Sports who also work with the likes of Alvaro Bautista, Mika Kallio, Nico Terol, Alex de Angelis, and John’s 2013 teammate Jack Miller.
Scorpion not only provide highly advanced helmets with sophisticated protection and ventilation features, but also – ideal for championship riders – a maintenance and service centre in the MotoGP paddock so that throughout the season any wear and tear, maintenance and servicing can be carried out on the spot.

“I get a number of helmets a year from Scorpion,” says John, “and they also provide a great service at the track. Each weekend they’ll be there – and after each session you take the helmet over to their truck and they dry out the inside, clean the visor, sort out new tear-offs for you… so basically it’s as good as new.
“I came up with the basic design, and with the Saltire we’ve also got the thistle which I’ve used for a long while – and with that we thought that the top part of the thistle also looks like a place called McCaig’s tower which overlooks Oban, so there’s a nice link to my hometown with that. So I sent Bike Paints my rough sketch on paper, and they just picked it up and ran with it. I love it – they did a cracking job.” 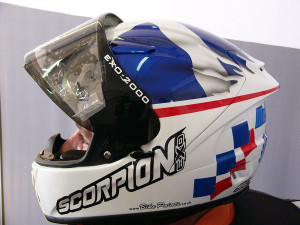 Scorpion supplied Bike Paints with shells to work with, simplifying the process by avoiding having to stip out and disassemble a series of helmets in order to work on them.
Deirdre Grant continues, “As John had come along with most of the design already done, it was just the execution that took the time (helped by the fact that these helmets came direct from manufacturer as bare shells and we didn’t have to do any stripping out or fitting up).
“We did 3 helmets at the same time which speeds up the progress, and they were all finished within a week along with some other work fitted in between waiting for paint to dry. The helmets are base coated and then the other colours painted and then any shading is done and then finally 2 part clear coat lacquer applied as required”

Like John himself, Bike Paints, were delighted with and proud of the end result: “We felt the design came out really well,” says Deirdre, “it is nice and clean and sharp – and we think it looks great on television.”

And it’s not long now until we see John out testing again and get the first look at that familiar lid ahead of the 2014 season – and a great reminder that Qatar won’t be too far away!