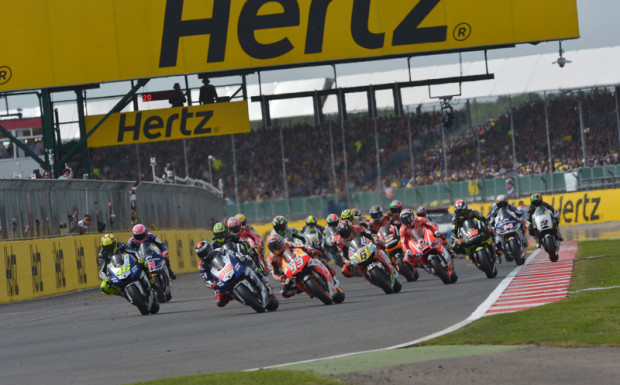 With five British riders including John confirmed for the 2014 MotoGP™ World Championship, and thoughts quickly turning to the season ahead, which gets underway in Qatar in March it’s worth making sure you don’t miss out on a good deal if you were thinking of going to Silverstone. The deadline for securing the best priced tickets to this year’s Hertz British Grand Prix (MotoGP™), taking place on 29 – 31 August, is fast approaching and Silverstone is advising fans to make the most of its ‘Early Bird’ offer before 17:00hrs on Monday 10 February.

A limited number of ‘Early Bird’ tickets are still available, offering savings on both Three Day and Race Day tickets. There are also fantastic offers on family tickets, where two adults and three children can save up to £157 on a family pass for all three days of the event.

Taking place over the final weekend in August, Silverstone is expecting another impressive crowd at the UK’s premier motorcycling event. Richard Phillips, Silverstone’s Managing Director, said: “Last year’s British Grand Prix saw record crowds, with fantastic weather and three sensational races in MotoGP™, Moto2™ and Moto3™. I thoroughly enjoyed watching the 2013 season unfold and this season is looking to be just as entertaining, particularly for the British fans. The atmosphere at Silverstone is sure to be electric as the crowd gets behind this crop of extremely talented riders.

“The ‘Early Bird’ offer is the best opportunity for fans to purchase tickets at the lowest prices, so anyone planning on coming to MotoGP™ in August should take advantage of this offer before 10 February.”

Tickets for the 2014 Hertz MotoGP™ British Grand Prix are on sale 24 hours a day, seven days a week. A limited number of tickets are available at ‘Early Bird’ prices until 17:00hrs on Monday 10 February. Visit www.silverstone.co.uk for more information or call 0844 3728 300.