Slow but steady progress for John at Valencia test 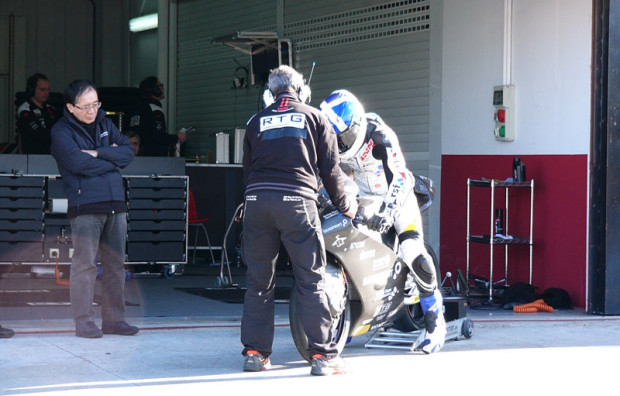 The Valencia test proved a slower start to the season than planned as John’s testing of the new Honda was delayed as an engine for the new chassis had not arrived. Heavy snow in Japan caused some chaos on the roads and at the airport so the freight missed its scheduled flight.

As a result, Tuesday and Wednesday were spent on last year’s FTR Honda. John circulated to at least get back into the frame and get to know his new pit crew better, but as the weather was very cold and then windy it was not ideal.

Day 1 was even more frustrating as John, and several others, slipped off in the morning and lost the rest of the sessions. But as it was, team mate Efren decided not to go out in the afternoon as he was going to achieve little in the conditions and, with a limited supply of spares for the new machine, it wasn’t worth any risk.

Even after the limited run he had in the morning he said he had a good feeling with the new bike and whilst he’d have liked some more engine power the chassis felt very comfortable.

Wednesday saw a little warmer weather and less wind, but John still had no engine, so once again went out on the FTR to try some new forks and play around a little with some different settings. In the closing stages of the last session he got to try Efren’s new Honda, managing eight laps but beating his FTR time on his third lap with ease.

John’s first impressions were the same as his team mate’s ‘I felt comfortable immediately and got a lot more feel from the new Honda chassis. The engine had a bit more power for sure and lap time came without really pushing crazy as the last thing I wanted to do was bin it on my first outing. Efren would never have forgiven me!’ As play closed for the day the courier van arrived with the new engines so the guys set to work to slot it into the waiting chassis.

An even sunnier start to Thursday and with track temperatures a little more reasonable the day started well. John did some steady laps to check the new bike over and then started to get the feel of the new machine. Throughout the day he tried various suspension settings to understand what effect they would have and start to move forward to a reasonable pace.

However caution was the word of the day as the temptation was to chase the times of the guys who had been pushing for the last two full days and some even longer as they had also had the luxury of a few days test the week before at Almeria. By the end of the day the team felt they were making some solid progress.

The second official IRTA test starts next Tuesday at Jerez, so let’s hope the wind drops before the team get there so they get a good run at it.