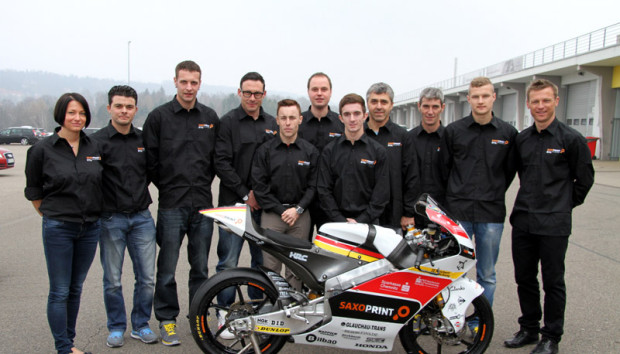 After a long winter break featured the heads of Saxoprint – RTG have officially presented their plans for the upcoming racing season.

There was a Q&A with the press and all interested parties the managing partner, Dirk Heidolf, the shareholders and the new main sponsor, Saxoprint with Klaus Sauer and the team’s riders in the Moto3 World Championship and CEV.

For the coming season the team is running two bikes in the Moto3 class of MotoGP, ridden by John McPhee and Efren Vazquez.

John and Efren will each be competing on factory bikes from Honda and will be on the hunt for points. Honda has worked closely in the past few years with the team and Heidolf expressed very positive about the collaboration with the Japanese.

John starts with a little more knowledge in his second World Championship season. His goal is to make a good improvement on the previous year. He hopes thereby to benefit from the experience of his Spanish team-mate, with whom he has built up a good friendship during the tests.

At the end signed Klaus Sauer Saxoprint the contract with RTG ​​in front of the journalists and other audience members. And so the newly title-sponsored team – “Saxoprint – RTG” was launched.

After the official part of the morning, there was an evening presentation event, consisting of sponsors and members of the press, which we will have reports, quotes and photos from in due course.

And then after a short breath it’s next Sunday already at the official IRTA Test Jerez. From there, the boxes are packed for overseas where at 23/03/2014 Qatar will be the first stop for the riders.