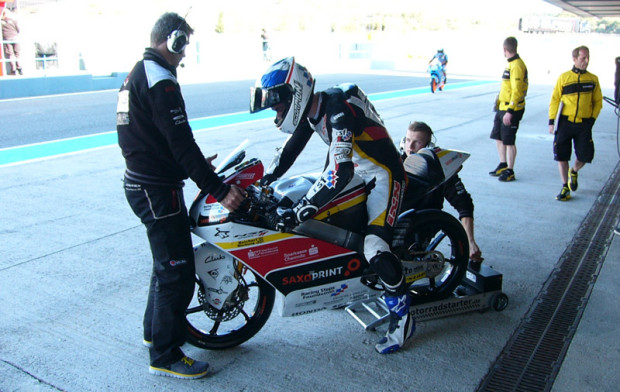 This last official three day test at Jerez gave John and RTG the opportunity to explore some more chassis settings for their new Honda machines. The weather was sunny but a couple of sessions were affected by the notorious Jerez winds, which can so easily upset these very light bikes.

By the end of the three days the whole team were pleased with the information they had gathered and the performance gained. John ended the test in 6th place overall and just 0.234s off Jack Miller’s fastest time of the week at 1:46.259. John’s new team mate, the very experienced Efren Vazquez was just ahead of him by 0.101s in 5th. It was also good news to see the performance of the new Honda was much closer to the KTMs this time out.

The Monlau riders had the benefit of some improved engine parts on the last day and Marquez was the fastest Honda, second to Miller’s KTM. Hopefully this sets the scene for some much closer racing between the marques through the coming season.

Test progress can sometimes seem painfully slow going through different suspension and chassis configurations but, as the Honda is totally new, it’s critical to understand how changes impact on the handling. Only in this way can the rider and team get the most from the overall package.

The data from the very many sensors on the bike have certainly made it all much more of a computer based activity. But in the end it’s the rider’s feedback and his confidence in how far he can push the bike that makes the difference. At times the process also calls for a ‘back to where we started’ comparison, just to ensure real progress is being made and nothing has been missed.

‘Yeah, at this stage of the season is it a bit frustrating at times’, said John ‘As a racer you just want to get out to the first race and get on with it! So some days, you have to make a conscious effort to keep your motivation. Going round and round, trying to assess tiny changes requires a real concentration if you’re going to give quality feed back to your engineers. In a typical day we can do three sessions of around 20-25 laps and a lot of that will be on the limit to judge just how far you can safely push the bike. When you think that a race here is 15 laps, that means we’re doing four or five times race distance on a test day. Your average biker will probably think it’s a real track day jolly, but it’s actually really tiring and at the end of the day you’re just ready for a hot shower, a good meal and an early night! Anyhow, the important thing is that we leave Jerez having moved forward with much more confidence in the bike and our understanding of what we are doing. ’

This last test also gives the team the chance to check out new equipment, new livery and garage decoration; riders get new boots, gloves and leathers to try to ensure they fit and are comfortable before racing in them. At the end of the test all the teams pack everything they’ll need for the next three ‘fly away’ races in to flight cases and say goodbye to them until they unpack everything for the first race next week in Qatar.

‘I’m really looking forward to getting back into ‘race mode’ now’ said John, ‘It always seems a long winter break. These first three races will be difficult as I got knocked off big time last year in Qatar, had a difficult first outing in Texas and now we have another new circuit in Argentina as our third race! But nothing like a challenge and in my second year with RTG and I get on really well with my new crew: Toni, Frank, Anton and Peter. So I’m really up for it!’