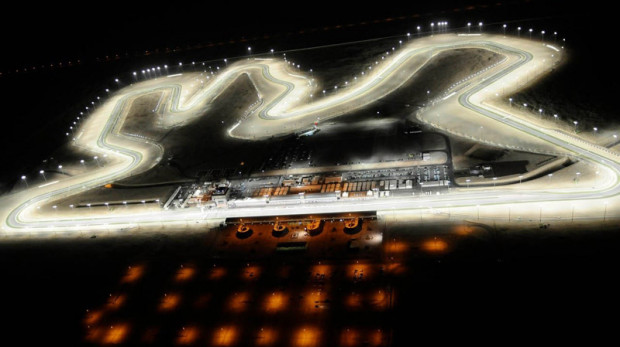 The floodlit Commercial Bank Grand Prix of Qatar will signal the start of the 2014 MotoGP™ season this weekend, as 21-year-old Marc Marquez looks to begin the defence of the World Championship title he historically won on the first time of asking last year.

This weekend’s race will be the 11th at the desert-based Losail International Circuit, which has been on the calendar since 2004. The track first welcomed the season-opener in 2007 and has hosted an evening race since 2008.

The first Qatar winner was Sete Gibernau, although in more recent times one looks to Jorge Lorenzo who has claimed the last two events. Riding for Movistar Yamaha MotoGP, Lorenzo faired better in the Phillip Island test than at the preceding pre-season gathering at Sepang and will now be threatening for a hat-trick of Losail victories. However, team-mate Valentino Rossi will also be looking to challenge, having battled hard with Marc Marquez last year.

Marquez heads into the 2014 campaign somewhat on the back foot, having suffered a broken leg in a training accident exactly six weeks before the day of opening free practice. The Repsol Honda Team rider may well be thinking of the long game, whereas team-mate Dani Pedrosa will certainly be hoping for a first race win in Qatar.

Ducati Team generated plenty of headlines over the winter break with its much-publicised switch to Open bikes. From 2014, all bikes in the field are obliged to run the spec ECU hardware as supplied by Dorna Sports and Magneti Marelli. Furthermore, teams must select either ‘Factory Option’ or ‘Open’ as their bike specification. Factory Option machines drop from 21 litres of fuel in 2013 to 20 this year, whereas those running Open bikes are obliged to use the spec ECU software as well as the hardware. In-turn, Open runners will enjoy privileges such as a maximum of 24 litres of fuel across a race distance, 12 engines per season (as opposed to five for Factories) and no subjecting to the new engine freeze regulations – allowing work on the machines during the season. Open runners can also enjoy unlimited testing.

As Ducati Team recruits Cal Crutchlow alongside Andrea Dovizioso, Monster Yamaha Tech3 places Moto2™ World Champion Pol Espargaro next to Bradley Smith. Spaniard Pol is one of four rookies in the 2014 premier class, but unfortunately sustained a broken collarbone during the final minutes of the last pre-season test.

However, it was Aleix Espargaro – elder brother of Pol – who was the revelation of the off-season thanks to his lap times with NGM Forward Racing. Making best use of a Yamaha lease deal, Aleix has been tipped by paddock insiders for some major surprises, as he and Pol look to become the first siblings to share a premier class podium since Nobuatsu and Takuma Aoki at Imola in 1997.

The intermediate class of the MotoGP™ World Championship promises to produce some superb racing once again this year and picking a Qatar race winner from the talented list of Moto2™ participants is a challenge in itself.

Reigning Moto2™ World Champion Pol Espargaro, one of the trio of title winning Spaniards last year, has moved up to MotoGP™ accompanied by rival Scott Redding, whilst Esteve Rabat remains in Moto2™ albeit with a new team having switched to the well-run Marc VDS Racing outfit over the winter.

Espargaro’s former teammate and compatriot Rabat has looked competitive in preseason testing with his new squad and with his teammate Mika Kallio, who has 39 podiums to his name in the smaller classes, the pair expect to fight at the front in Qatar.

The current Moto3™ World Champion Maverick Viñales and his colleague Luis Salom are debutants and may need time to adapt to the class, with plenty to learn as they get set to battle with their new team Tuenti HP 40.

Briton Sam Lowes comes into the Grand Prix scene as reigning Supersport World Champion and joins the Speed Up Moto2™ squad. Could he feature on the podium on his debut?

The exciting new Caterham Moto2 entry is spearheaded by Frenchman Johann Zarco and the sole American in the intermediate class – Josh Herrin – and fans will be eager to see how competitive the new team is at round one.

In the Mapfre Aspar Team Moto2 team two more Spanish race winners are striving for further triumphs this campaign. Nico Terol signed off 2013 with his third victory of the year at Valencia, whilst his improving teammate Jordi Torres won at Sachsenring and will want more podium results in his second full season.

With two of the three Spanish riders who dominated the Moto3™ class last year – eventual title winner Maverick Viñales and regular race winner Luis Salom – both having graduated to Moto2™ in 2014, there are several new candidates who will be shooting for the podium at round one in the lightweight category.

Indeed the new season promises to produce an intriguing championship battle right from the word go. Having missed out on the title to Viñales on the last corner of the last race in an incredible season of racing in 2013, Alex Rins opted to remain in Moto3™ for another season.

He scored six race wins and 14 podiums in total last year so his objectives are to maintain that form and to stay in front of his rapidly improving Estrella Galicia 0,0 teammate Alex Marquez, the younger sibling of MotoGP™ sensation Marc Marquez. After an operation on his right wrist Rins missed some of the preseason and he and Marquez are on Honda Moto3™ machines this year, so their pace in Qatar will be interesting to see.

One of Red Bull KTM Ajo’s new recruits for 2014, Jack Miller, has been on the pace in testing – and he will be looking for a strong start at the Losail International Circuit as he looks to avoid the inconsistency and injuries which have hampered him in the past.

Miller shares a box with talented young Czech prospect Karel Hanika who has also shown his pace in test outings and he joins the World Championship as the reigning Red Bull MotoGP Rookies Cup champion with new circuits to learn. Could he stun the paddock with victory in his first Grand Prix?

Hanika’s fellow countryman Jakub Kornfeil starts his fifth full GP season at perhaps his most competitive level to date, riding in the Calvo Team KTM with Brazilian Eric Granado and Spaniard Isaac Viñales – the three of them aspiring to reach the podium in the desert.

Another interesting project for 2014 is the arrival of Husqvarna on the World Championship scene, with the KTM backed brand coming into Grand Prix racing to be ridden by Englishman Danny Kent and Finn Niklas Ajo. Kent is aiming to win races again after returning from Moto2.

Could this be the year the Italians mount a resurgence in the smaller class? Junior Team GO&FUN Moto3 and Niccolo Antonelli certainly hope so and there is also huge interest in Italy in the new SKY Racing Team By VR46 team, featuring Romano Fenati and Francesco Bagnaia. Fenati was of course on the Qatar podium in 2012 as he made his GP debut.

Also keep an eye out for Portuguese rider Miguel Oliveira on the Mahindra and his new Australian colleague Arthur Sissis as they look for a decent points haul at the first race of the year.