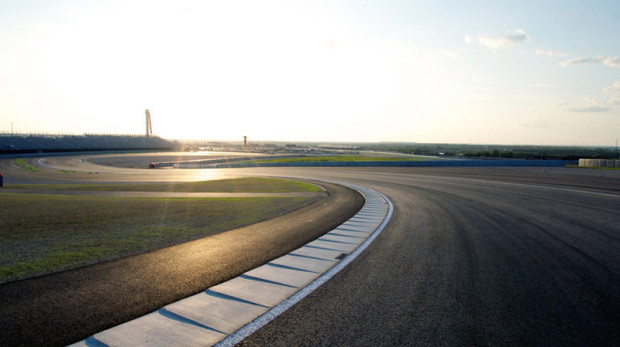 Repsol Honda Team’s Marc Marquez will be the man in everyone’s sights as the MotoGP™ grid crosses the Atlantic to the Red Bull Grand Prix of the Americas this weekend at the Circuit of the Americas in Austin for round two of the World Championship.

Following a spectacular race between Marquez and Movistar Yamaha MotoGP’s Valentino Rossi in the first race in Qatar, fans will be hoping for a repeat as the riders tackle the track’s unique layout. Marquez, despite breaking a leg only seven weeks ago, has looked in incredible shape – and will no doubt be tough to overhaul at the circuit where he took his first-ever MotoGP win last year.

For Rossi it will be crunch time as he sets out to prove that his pace in Qatar was not a one-off, while his teammate Jorge Lorenzo will look to make up for his first-lap crash in race one. Lorenzo’s uncharacteristic mistake will only spur him on more, as he takes to the track which last year looked to favour the rival Hondas. Repsol’s Dani Pedrosa will certainly be hoping that is the case, as he aims for the top step of the podium at the track he pushed teammate Marquez extremely close last year.

There will be a lot of interest in the field just behind the front-runners, as the likes of GO&FUN Honda Gresini’s Alvaro Bautista, LCR Honda MotoGP’s Stefan Bradl and Monster Yamaha Tech3’s Bradley Smith showed podium potential last time out, despite all suffering falls. If they can keep their respective pace over race-distance the factory riders could seriously be under threat. The Ducati Team with Andrea Dovizioso and Cal Crutchlow have also shown a vast improvement in race-pace, and will aim to jump further up the rankings in the US.

A big question mark still remains over the potential of NGM Forward Racing’s Aleix Espargaro, who has showed that over one lap he can be one of the fastest. If he qualifies to his true potential in Austin, a podium does certainly not look out of the question. His younger brother Pol on the Monster Yamaha Tech3 satellite machine will be hoping for a better second GP, as he had to retire with mechanical issues last time out. Pramac Racing’s Andrea Iannone, who continued to the finish line even after suffering a crash, could prove to be a surprise in Texas, after the Italian showed some serious speed in Qatar.

American fans will have two locals to cheers on in the form of NGM Forward Racing’s Colin Edwards and Drive M7 Aspar’s Nicky Hayden, with both showing promising signs in Qatar. Both are now on competitive machinery, though Edwards has cited that he still needs to adapt his riding style, with Hayden lacking a bit of top-end power. Of the “Open” bikes, another to watch will be GO&FUN Honda Gresini’s Scott Redding, who had a fantastic debut in Qatar, despite suffering with a lack of fuel.

Tito Rabat began 2014 on the right note with a well-judged victory in last month’s Qatar Grand Prix. Off the back of a Marc VDS Racing Team one-two finish following Takaaki Nakagami’s disqualification, the likes of Nico Terol will want to respond…

It was Terol who convincingly won last year’s Moto2™ race at Circuit of the Americas on what was the World Championship’s first ever visit to the Texan race track. Proving that nothing should ever be taken for granted, Rabat’s then team-mate and championship leader Pol Espargaro crashed out due to an unforced error.

A year on, it is Rabat (who finished second in Austin last season) who returns to COTA as the championship leader. Marc VDS could not be happier, having scored the maximum possible 45 points between its two riders with Mika Kallio second, whereas Tom Luthi inherited a podium finish with Interwetten Paddock Moto2. This came after the Nakagami’s IDEMITSU Honda Team Asia entry was removed from second place due to running an illegal air filter.

Questions may have been answered in Qatar, but plenty of new ones were asked. Such as: can Luis Salom find his form to match Pons HP 40 colleague and former Moto3™ rival Maverick Viñales? The latter climbed by ten places to finish fourth in Qatar as well as becoming the first rider to post fastest lap on his debut in Moto2™ (excluding the first ever Moto2™ race in 2010). As for Salom, the Spaniard ended a troublesome weekend in 14th spot but this is not expected to become a trend.

There were battles through pain for the likes of aforementioned Kallio and Sandro Cortese (Dynavolt Intact GP), with the German later being handed a penalty point for his part in the qualifying collision with Mapfre Aspar Team Moto2’s Jordi Torres (team-mate to Terol). Also receiving a penalty point was Federal Oil Gresini Moto2’s Xavier Simeon following an off-track misdemeanor with AirAsia Caterham’s Josh Herrin. Incidentally, both Herrin and team-mate Johann Zarco are aiming for much more after being involved in a four-rider incident on the very first lap of the season.

Sam Lowes was particularly impressive at Losail, as the British rookie finished sixth on his World Championship debut for Speed Up. He will be looking to use this as a motivator with 17 events still remaining in the 18-round campaign. Last year in Texas, pole position was clinched by almost seven tenths of a second; judging by the form so far in 2014, it may be decided more by hundredths or even thousandths…

The second setting on the 2014 Moto3™ calendar will be the spectacular Circuit of the Americas on the outskirts of Austin. Last year, Estrella Galicia 0,0’s Alex Rins claimed the first ever World Championship race victory on the anti-clockwise track.

In April 2013, the MotoGP™ World Championship received a warm welcome to the Lone Star State as Texas became a brand-new venue on the schedule. Second time around, the race will be staged on the slightly earlier date of 13 April and in the aftermath of a highly dramatic curtain-opener to 2014 under floodlights in Qatar.

At Losail last month, it was Australia’s Jack Miller who became a brand-new race winner in his first event with Red Bull KTM Ajo. The popular Queensland rider claimed his first podium finish as well as a race win, with Alex Marquez having run wide to lose the lead on the final lap. This time, the Honda rider will be looking to have the last laugh but will be chased all the way by team-mate Alex Rins; last season, the eventual title contender claimed his very first win in Austin, as the race was split into two halves following a red flag for Jasper Iwema’s accident.

Mahindra will again be looking to mix it up, with the Indian manufacturer now confident about challenging for the rostrum at every Grand Prix. Not only will Mahindra Racing factory riders Miguel Oliveira and the returning Arthur Sissis (who sat out of Qatar due to a bout of tonsillitis) be attacking, but also the customer Mahindra riders such as Brad Binder with Ambrogio Racing.

It is highly possible that the Qatar top three of Miller, Marquez and Efren Vazquez (whose podium finish was his first since 2011) will not be repeated this weekend, with several riders having expected more from Round 1. Reigning World Champion outfit Calvo Team will be pushing for at least a podium, with Jakub Kornfeil plus Isaac Viñales and Eric Granado having assisted each other throughout the opening weekend by working on slipstreaming during practice sessions. The same can be said for SKY Racing Team by VR46 pilots Francesco Bagnaia and Romano Fenati. After topping all practice sessions, the latter was particularly disappointed to end the opening race 12th; in Texas he hopes not to be plagued by more chatter issues.