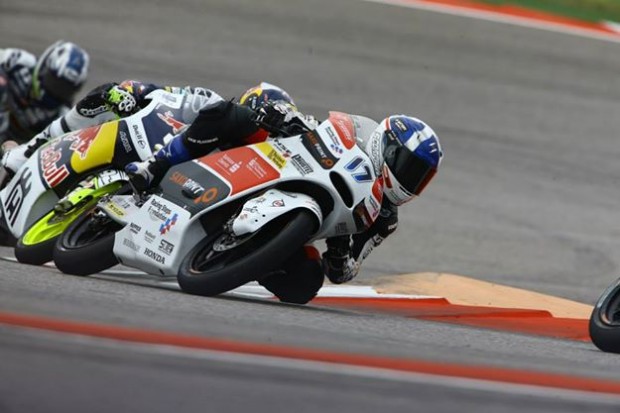 It was a thrilling Moto3 race this Sunday in Texas, from start to finish. Right at the start of the race the pole-setter Jack Miller took the lead and headed the whole field. It stayed that way, except briefly, until the end.

John started from 15th place on the grid. Further back, he also had a race long fight with Danny Kent and Karel Hanika all challenging for 10th. In the last two laps, he rode from 12th and made it up to 9th position, putting both SAXOPRINT – RTG riders in the top ten. He also rode a great race, gaining important points and stands tenth in the Championship.

John’s teammate Efren Vazquez also managed a great start and immediately settled with Miller, the two pulling away from the rest of the field. Quickly, they built up a lead of more than 1.6 seconds.

Alex Marquez, leading the following group managed to catch the front running pair in lap 6. The three then constantly changed places. In the final laps, Romano Fenati joined to the trio and also the fight for victory.

Through the last two laps, Vazquez tried several times to take the lead and for a short time he succeeded in that too. In the last turn Alex Marquez fell from fourth position. Efren was unable to pass Fenati who had just taken 2nd place and Miller who had regained 1st, so he finished the race 3rd, as he had in Qatar.

John McPhee
“I had a really good battle in the race today, and it felt good finishing in 9th position from that. I’m really happy to get my first top 10 finish of the season and feeling stronger race by race.”