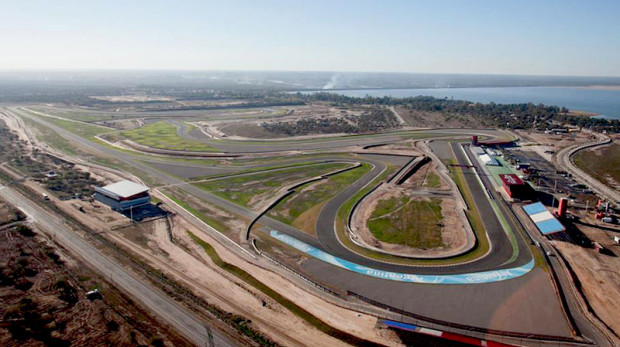 The question on everyone’s lips ahead of the inaugural Grand Prix Red Bull de la Republica Argentina at the recently updated Termas de Rio Hondo circuit will be whether can anyone can get past Repsol Honda Team’s Marc Marquez, who has been in spectacular form in the first two races of the season.

Whilst for every rider the circuit will be a new challenge, Marquez showed last year in Austin that he is one of the fastest to adapt to new layouts and conditions. And with the pace he has been showing so far, many will see him as the clear favourite as MotoGP™ travels to South America for the first time since 1999. His ability to make the hard Bridgestone rear tyre work has arguably set the bar even higher for his rivals, as tyre issues both with the rear and front have plagued those that are considered regular front runners.

Marquez’s teammate Dani Pedrosa is arguably an exception to that, having also rode a brilliant race in Austin last time out, though with the commonly used medium rear compound. Movistar Yamaha MotoGP’s Jorge Lorenzo will be doing all he can to put the disastrous start to season behind him – first crashing out of Qatar on the first lap, and then jumping the start in Austin before finishing 10th. As much as bike set-up, the Mallorcan will be aiming to regain the mental strength that has stood him in good stead over the years.

His teammate Valentino Rossi has shown that he can still keep up with the front-runners, though struggled with a fast-degrading front tyre in Austin. If he and new crew chief Silvano Galbusera can overcome these issues, Rossi could once again be a podium contender. His previous employers, Ducati Team, had a great race in Austin, taking their first dry podium in over a year with Andrea Dovizioso keeping his nerve to guide home the Desmosedici GP14. His teammate Cal Crutchlow on the other hand will find it tough, after fracturing the little finger on his right hand in a crash during the race and having subsequently also had surgery on his right forearm.

The satellite bikes have been putting on a great show for the riders since the start of the season. Pramac Team’s Andrea Iannone in particular will be one to watch, as he had his Ducati in a podium position for a significant stretch last time out before suffering the same front tyre issue as Rossi. Monster Yamaha Tech3 duo Bradley Smith and Pol Espargaro both demonstrated a willingness to go fairing to fairing with the likes of LCR Honda MotoGP’s Stefan Bradl, which is great news for MotoGP, though might leave their team managers with a few more grey hairs. GO&FUN Honda Gresini’s Alvaro Bautista, alongside Bradl and Crutchlow, all tested at the Argentinian track last year, and are likely to have an advantage in the first free practices.

The “Open” class bikes on the grid will have their work cut out trying to hunt down NGM Forward Racing’s Aleix Espargaro, who is looking ever more comfortable on his Yamaha-powered machine. The likes of his teammate Colin Edwards, GO&FUN’s Scott Redding, Drive M7 Aspar duo Nicky Hayden and Hiroshi Aoyama, as well as Pramac’s Yonny Hernandez are showing improvements with every session and should have the possibility to challenge. The other riders to line up under the “Open” regulations are PBM’s Michael Laverty and Broc Parkes, Iodaracing’s Danilo Petrucci, Cardion AB Racing’s Karel Abraham, as well as Avintia Racing’s Hector Barbera and Mike di Meglio.

Following Bridgestone’s tyre test there last year with Bautista, Bradl and Crutchlow, the tyre manufacturer has opted to bring a symmetric rear, with both the fronts and rears set to be of the harder compounds to cope with the tyre-punishing track.

Heading to the brand-new Termas de Rio Hondo circuit in Argentina, Moto2™ is the only World Championship class that can boast different winners from the first two races. With a brand-new venue now on offer, the chances of a third could be high.

The intermediate class has certainly attracted variety so far in 2014. In Qatar and Texas, five different riders from a possible six could be seen on the podium. Tito Rabat was the only one to stand up there at both events, confirming his position as a real championship favourite, however new victor and 19-year-old Maverick Viñales has made a real impression as he won his first Moto2™ race earlier than any other rookie had ever done in the class.

The Moto3™ World Champion would appear to have given himself a wonderful opportunity to emulate Marc Marquez and jump up to the premier class at the age of just 20. It’s still early days, but the Pons HP 40 rider will certainly be looking to confirm that Texas was not just a flash in the pan.

As for Marc VDS Racing Team’s Rabat, he may have struggled initially in Texas qualifying but this was due to gearbox problems; after they had been solved, he immediately set pole position and went on to finish second, with Mika Kallio now hoping to beat his team-mate for the first time this year.

Others arguably have some ground to make up, such as Interwetten Paddock Moto2’s Tom Luthi and NGM Forward Racing’s Simone Corsi who are likely to put the emphasis on qualifying. Mapfre Aspar Team Moto2 are also desperate for a strong result at the new Termas de Rio Hondo circuit, with Terol having not scored points yet. Others were far happier in Texas, with the likes of Anthony West (QMMF Racing Team) and Tech 3 pairing Marcel Schrotter and Ricky Cardus all having achieved top ten finishes at Round 2.

So, what are the chances of a new winner for Moto2™ in 2014? Judging by recent history, it looks good. The last time MotoGP™ visited a new venue was Texas in 2013, when it was Terol who clinched his first victory in the class…

The honour of riding in the first ever World Championship race at the new 4.8-kilometre Autódromo Termas de Río Hondo circuit goes to the Moto3™ field this weekend as the series heads to Argentina for Round 3, with the smaller category running in the opening race of the day on Sunday.

The Gran Premio Red Bull de la República Argentina will see Australian rider Jack Miller striving to make it three wins in a row, on the back of his stunning victories in Qatar and Texas. Having joined the successful Red Bull KTM Ajo for 2014, Miller has demonstrated the full potential many knew he had, taking maximum points from the opening two rounds and enjoying himself along the way.

Another rider who has made a solid start to the year is Efren Vazquez (SAXOPRINT RTG) who has also been on the podium twice already this year and aims to continue making the most of the solid support he is getting from Honda on their improving Moto3™ machine.

Sure to be pushing Miller and Vazquez hard in Argentina is Italian youngster Romano Fenati, who rides for the new Valentino Rossi-backed SKY Racing Team VR46 and who chased Miller across the line in Austin, just 0.069s adrift of his rival.

Will the visit to South America see Estrella Galicia 0,0 pair Alex Rins and Alex Marquez click into form on their competitive Honda packages? Rins sits fourth in the early standings, having started the season somewhat off-colour and off the podium in the first two races. Marquez is sixth overall after missing victory at Round 1 by just 0.233s and having crashed out late from the race in Austin.

Sandwiched between the Spanish pair in the overall classification is Jakub Kornfeil (Calvo Team), the 2009 Red Bull MotoGP Rookies Cup champion having already displayed glimpses of his pace and talent early in 2014. Could he finally clinch his first Grand Prix podium this weekend?

Meanwhile Moto3™ race winner Danny Kent will aim to hit form in the new Red Bull Husqvarna Ajo structure, having failed to impress so far on his return from Moto2™.

FP1 for the Moto3™ riders at the Gran Premio Red Bull de la República Argentina will be the first action of the weekend and gets underway on Friday at 9am local time (GMT -3).