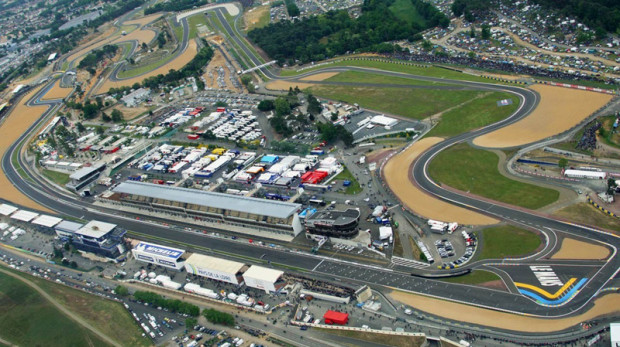 The MotoGP™ field returns to France this weekend for the fifth round of 2014. Reigning World Champion Marc Marquez has dominated proceedings so far this year, already making him the 16th most successful rider for race wins in the history of the World Championship.

Based on results from both qualifying and races so far this year, rivals of Marquez are likely to be wondering what can possibly be done to halt the 21-year-old’s charge. He has become the first rider to win the opening quartet of premier class races from pole position since MotoGP™ Legend Giacomo Agostini in 1971 and, amongst other things, is the first rider to clinch five consecutive pole positions since Casey Stoner in 2011. On top of this, one has to look back to Valentino Rossi in 2005 to the last time one rider carried such a points lead after four races, as Marquez now leads by 28.

Jerez also saw Marquez winning at the Andalucian venue for the very first time in the World Championship, meaning there is no longer a single race track on the calendar on which he is yet to claim a victory. Should he also reach the top step of the podium at Le Mans this weekend, the Repsol Honda Team man will become the youngest ever rider to win five consecutive Grands Prix in the premier class; the mantle would be taken away from Englishman Mike Hailwood, who achieved the feat in 1962.

With Dani Pedrosa’s second position in the classification sealing a one-two for Honda, Valentino Rossi leads the Movistar Yamaha MotoGP charge from third place as he continues to use a new chassis, based on improving braking stability. Jorge Lorenzo is now up to fifth place in the standings and intends to work more around the Soft compound tyre, while Ducati Team’s Andrea Dovizioso was in the news last week as his management confirmed talks with Suzuki for a possible ride in 2015.

Danilo Petrucci will not be racing in France, as the IodaRacing Project rider recovers from an operation on his right wrist following a heavy accident in the Jerez Warm-Up session. In fact, he was the third MotoGP™ rider to undergo surgery last week, as both LCR Honda MotoGP’s Stefan Bradl and the aforementioned Pedrosa were treated for arm pump. Both now hope to achieve the highest possible levels of fitness as they head to Le Mans – where 12 months ago Pedrosa was able to claim victory.

Last year, the French Grand Prix was affected by inclement weather conditions; perhaps a repeat could be something to prevent the Marquez charge. Considering a quarter of the season will already have gone by the time the chequered flag falls on Sunday afternoon, the rest of the field will certainly be hoping that this is the case…

Opening MotoGP™ practice for the Monster Energy Grand Prix de France commences at 9:55am local time (GMT +2) on Friday, with the 28-lap race beginning at 2pm on Sunday afternoon. Is more history set to be made in Maine?

As the Moto2™ riders head to Le Mans this week for the Monster Energy Grand Prix de France it is Spanish rider Tito Rabat who remains as the title favourite and standings leader after four rounds.

In truth Rabat had a somewhat difficult weekend at Jerez last time out with engine failure hindering his Saturday progress and a race performance which saw his miss the podium for the first time in 2014. He will be keen to bounce back with a strong result in France.

Finnish rider Kallio secured victory at round four with a dominant ride from pole, for his first win since Brno last year and he has the experience required to keep the pressure on Rabat over the course of the season. Kallio was second in last year’s French Moto2 contest.

Behind those two in the standings is Moto3™ World Champion Maverick Viñales who has made an impact since graduating to the intermediate class, with his stunning Austin win and two further top five finishes. The talented young Spaniard will shoot for the podium again in France, with his Pons HP 40 colleague Luis Salom – currently eighth in the standings – looking to at least match his results in the coming weeks.

With the same tally of championship points thus far is Dominique Aegerter
(Technomag carXpert) who appears to be maturing continually, with two podiums to his name already this season. He is sure to be a threat once more at Le Mans.

Nicolas Terol (Mapfre Aspar Team Moto2) and Josh Herrin (AirAsia Caterham) are set to return from their respective recent injuries and both will be aiming to get their campaigns back on track after difficult starts to the year.

The Moto2 riders will commence their practice at Le Mans with FP1 at 10.55am local time on Friday.

Jack Miller (Red Bull KTM Ajo) and Romano Fenati (SKY Racing Team VR46) have been the stars of the show so far in Moto3™ this year and both will desperate for victory as the riders do battle once more at the Monster Energy Grand Prix de France.

Championship leader Miller started the season with a bang as his took wins in Qatar and Texas and he has also taken pole at the last three rounds, but the Australian is being hunted down at the top of the standings by the determined Italian Fenati.

Mentored by nine-time World Champion Valentino Rossi, Fenati has taken victory in the last two races and appears to be a serious threat to Miller’s ambitions with just five points separating them at the top.

Behind them in the standings is Efren Vazquez (SaxoPrint-RTG) who is still yet to win a race in his Grand Prix career. However Vazquez has talent, experience and consistency on his side having started his eighth World Championship season with three podiums from four races.

His compatriot and fellow Honda rider Alex Rins (Estrella Galicia 0,0) is fourth in the standings as the riders head to round five, though having fought for the 2013 title until the last corner of the last race Rins probably did not expect to be 28 points adrift of the championship lead at this stage of the season. His teammate Alex Marquez is a further two points behind in the rankings in fifth place overall.

Practice at the Monster Energy Grand Prix de France commences on Friday morning with the Moto3 riders heading out for their FP1 run at 9am local time.