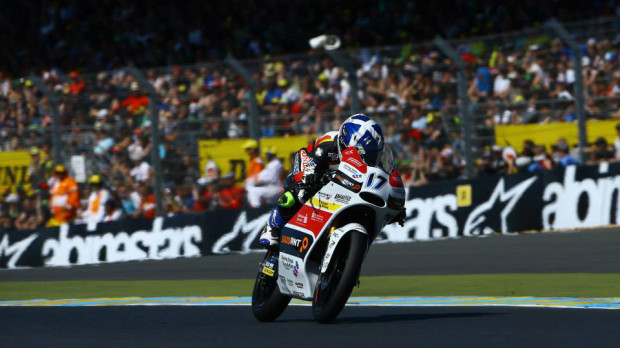 Marquez produced a fantastic fightback after an early mistake to lead by a second on lap 16 having been 10th on lap one. Rossi demonstrated his competitiveness again to lead for several laps in the first half of the race but ultimately could not hold off the rampant Marquez.

Whilst Rossi achieved his tenth premier class podium at Le Mans and his 150th in the top category, Marquez became the first rider to win five successive premier class races from pole since Mick Doohan in 1997.

Meanwhile, it was Bautista’s first podium since 2012 and a great reward for the determination he has shown since his three DNFs at the start of the season.

Jorge Lorenzo (Movistar Yamaha MotoGP) finished three seconds behind Pedrosa in the unfamiliar territory of sixth for the 2010 and 2012 MotoGP World Champion.

Nicky Hayden (Drive M7 Aspar) crashed on the first lap after contact with Andrea Iannone (Pramac Racing), only for the Italian to go down shortly afterwards. Hector Barbera (Avintia Racing) was also an early crasher, though none of those three were seriously affected by the incidents.

Kallio rode calmly from fourth on the grid, hunting down provisional race leader Corsi for the victory and taking over at the front with eight laps to go. Corsi eventually finished a second behind the winner, holding off a late challenge from championship leader Rabat – who had to settle for third.

Ricard Cardus (Tech 3) and Mattia Pasini (NGM Forward Racing) crashed out together early on, with Pasini unhappy with Cardus’ role in the accident.

Another brilliant race saw eight riders in podium contention on the last lap with Miller holding off a challenge from pole man Efren Vazquez (SAXOPRINT RTG) in the final stages to secure his third win of the year.

Rins led by almost two seconds at one point but was eventually pulled back for second, with Viñales riding bravely to achieve his first ever Grand Prix podium result.

Francesco Bagnaia (SKY Racing Team VR46) and Alex Marquez (Estrella Galicia 0,0) were both in the top five, both within 0.5s of the podium.

Vazquez had also led the race at various points and was unhappy to finish sixth when a first ever victory looked possible.

The winner of the last two rounds Romano Fenati (SKY Racing Team VR46) retired with electronics issues towards the end of the race.