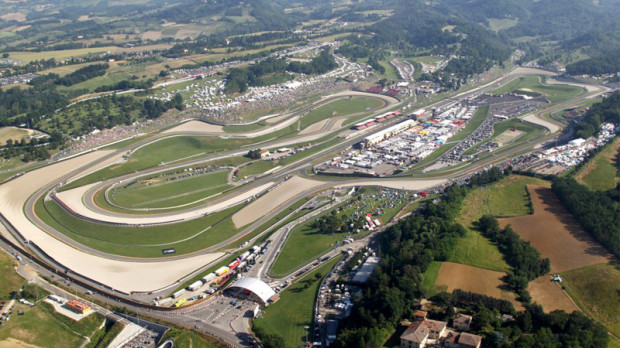 As MotoGP™ heads to Mugello for what is always one of the most anticipated rounds on the calendar, Valentino Rossi is all set for his 300th Grand Prix appearance – having achieved his 150th premier class podium last time out at Le Mans.

Following the race in France, in which Rossi finished second to the victorious Marc Marquez, he was already looking forward to the Gran Premio d’Italia TIM and another chance to battle with the in-form World Champion and standings leader, this time in front of the passionate Italian crowd.

With his victory at the French GP Marquez became first rider to win the opening five races of the year, all from pole position, since Giacomo Agostini in the 500 class in 1971.

Marquez leads the standings by 42 points from Repsol Honda team-mate Dani Pedrosa and will aim to extend his winning run at round six – at a venue where he crashed out last year.

Marquez will know, however, that Pedrosa will be hungry for his first win since Malaysia last year and that Rossi will be doing everything in his power to add to his nine victories at Mugello, seven of which have come in the premier class. It is fair to say that a win for Rossi in his 300th GP would certainly be popular with the home crowd.

Another strong contender for maximum points in Tuscany will be Rossi’s Movistar Yamaha MotoGP team-mate Jorge Lorenzo. Although the 2010 and 2012 MotoGP™ World Champion is not currently in his best form Lorenzo has won the race at Mugello for the last three years, enjoying a circuit where Yamaha have a good record.

Just ahead of Lorenzo in the standings in fourth place at present is Ducati Team’s Andrea Dovizioso, who is sure to enjoy massive support this weekend. Thousands of faithful Ducatisti fans will gather at Correntaio corner once again to will Dovizioso towards the podium and to support his colleague Cal Crutchlow as the Englishman strives to move up the standings from 16th.

The likes of Stefan Bradl (LCR Honda MotoGP) and Alvaro Bautista (GO&FUN Honda Gresini) go in search of further top five results from sixth and tenth respectively in the championship table. Bautista arrives at Mugello on a high, having recovered from his early season dip by racing to third at Le Mans.

Another excellent performer at Le Mans was Pol Espargaro and the rookie will aim to build on his fourth place in France with another solid performance in Italy. Having adapted quickly to MotoGP in the first five rounds, Moto2™ World Champion Espargaro is just ahead of his brother Aleix Espargaro (NGM Forward Racing) and Monster Yamaha Tech 3 team-mate Bradley Smith in the overall classification.

Just outside the top ten in the standings is another Italian in Andrea Iannone.
The Pramac Racing rider looks to bounce back from two consecutive DNFs after showing his speed in practice and in the opening three races of the year.

Iannone’s compatriot Danilo Petrucci (IodaRacing Project) makes a welcome return at Mugello, having missed the trip to France with the fractured left wrist he sustained at Jerez.

This weekend’s Gran Premio d’Italia TIM is the 29th occasion that a GP has been held at the Mugello circuit, including 24 times in the consecutive years from 1991.

With his consecutive victories at Jerez and Le Mans, Mika Kallio has pegged back his Marc VDS Racing Team team-mate Tito Rabat in the Moto2™ championship standings, with Rabat now leading by just seven points ahead of the Gran Premio d’Italia TIM.
Last year at Mugello Rabat finished in 13th position and he is yet to step onto the podium at the picturesque Italian venue in his Grand Prix career.

The Spanish rider won two of the first three races of this year and looked like he might run away with the title, but Kallio has reeled him back in at the last two rounds, so Rabat will be pushing harder than ever for victory again at round six this weekend.

Like Rabat, Kallio has never been a rostrum finisher at Mugello, though it would be a surprise if neither of the pair could achieve a top three finish this time around in Italy given the strength of the team’s start to the year.

There are just four riders who have scored points in all of the first five Moto2 races of 2014. Rabat and Kallio are two of them, with Sandro Cortese (Dynavolt Intact GP) and Anthony West (QMMF Racing Team) having done so from further down the field – currently in tenth and 11th places respectively in the standings.

Closest to Rabat and Kallio in the general classification, albeit 30 points behind the Finn in third place, is the Moto3™ World Champion Maverick Viñales – who already has four top five finishes including one victory to his name in the intermediate class.

Viñales and his Pons HP 40 colleague Luis Salom – seventh overall – are likely to feature towards the front in Italy. Salom was a Mugello winner last year in Moto3.

Dominique Aegerter (Technomag carXpert) has again been a consistent performer this year since a mechanical failure in Qatar, with two podiums to his name and regularly challenging the front-runners. He sits fourth overall, just ahead of Italian rider Simone Corsi (NGM Forward Racing) who arrives at his home race in good spirits after finishing second at Le Mans.

Also inside the championship top ten heading to round six, the likes of Thomas Luthi (Interwetten Paddock Moto2), Jonas Folger (AGR Team) and Xavier Simeon
(Federal Oil Gresini Moto2) will all be striving for the podium in Tuscany.

As the Moto3™ riders head to Italy for round six the rest of the field are looking up the standings at Australia’s Jack Miller, who has been the standout performer over the opening five Grands Prix.
Miller’s season started with a bang as he collected two wins at the first two races, but he then saw his standings lead pegged back as Romano Fenati responded with two victories of his own, before Miller made a statement of intent with a brilliant win at Le Mans.

Whilst SKY Racing Team VR46’s Fenati was unable to finish the race in France due to electronics issues, Miller took control of the championship chase as he came out on top of a last lap battle with eight riders in contention for the podium in the final stages.

Though Miller may be clear at the top there is certain to be more close racing in Moto3 throughout the year, with just 2.173 seconds separating the Le Mans race winner and tenth place finisher Jakub Kornfeil (Calvo Team) at the finish line.

Indeed, remarkably, the total accumulated time separating the race winners from second place finishers in the five Moto3 races so far in 2014 is just 0.64s. On two occasions so far Alex Marquez (Estrella Galicia 0,0) has finished second by the tightest of margins and he looks for victory at Mugello to move up the standings from fifth overall.

Tragically the weekend before the trip to Mugello news reached the World Championship that Malaysian former FIM CEV Repsol rider and Grand Prix wildcard Aizat Malik had passed away after a road accident. Many of the Moto3 grid knew the young rider personally and the condolences of the MotoGP community are extended to his family at this sad time.