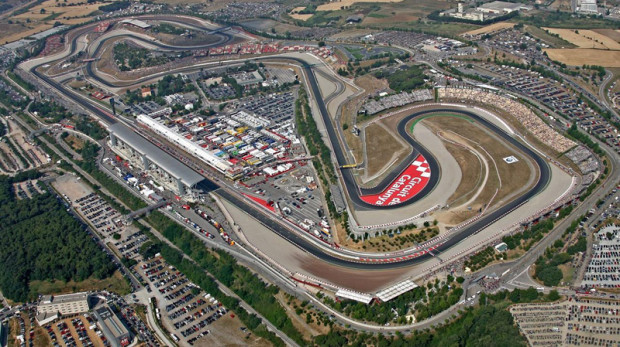 Mugello had it all. Rossi’s 300th Grand Prix, rain on the Friday and one of the best on-track fights in living memory thanks to Marc Marquez and Jorge Lorenzo. This time out, they’re in Barcelona and fighting for glory on home turf.

The 2014 Italian Grand Prix was quite something. While Rossi made up for his first-lap crash of last year with a rostrum, the two in front of him were battling hard all throughout the second half of the race, trading places on various occasions and at corners where one would not have expected a pass to take place. A highly memorable day under the baking Italian sun. However, it was the same man coming out on top as Marquez made it to 150 points: maximum score for the first third of the season.

In Italy, Marquez was helped by his Repsol Honda Team mechanics as, following the morning Warm-Up, they elected to modify his ratios for a longer sixth gear and therefore more straight-line speed: something that won him the race on Sunday. In the meantime, team-mate Dani Pedrosa fought up to fourth, continuing to struggle with his arm injury and now hoping for more in Catalunya.

There were certainly stand-out performances further back. Pol Espargaro quietly slipped into the top five for the second race running while Andrea Dovizioso and Andrea Iannone’s Ducatis came home sixth and seventh. As for Aleix Espargaro, the NGM Forward Racing rider described Mugello as his ‘worst race of the year’ so far.

Others are looking for a more positive outing at the Circuit de Barcelona-Catalunya. At Mugello Bradley Smith was left annoyed by front tyre choice, knowing even before sliding out of contention that his selection was wrong. Stefan Bradl was highly unfortunate, suffering two spectacular crashes (one in the Warm-Up and one in the race itself) that saw the German flying through the air, with the second occurring when he was collected by the wayward Ducati of Cal Crutchlow. As for Hector Barbera, the Avintia Racing rider was affected by gearbox problems and forced to park up; he now heads to his home event with the goal of finishing the race.

Last year in Catalunya, Dani Pedrosa set a scorching pace in qualifying as he broke Casey Stoner’s lap record from five years earlier. Surprisingly, the Sabadell-born rider has not claimed pole since. On the Sunday, it was Jorge Lorenzo who sealed the victory to mark his second in a row at the Montmelo-based venue. The World Championship now returns there for a 23rd successive year, with the first 500 race back in 1992 (then labelled the European Grand Prix) having seen that year’s World Champion Wayne Rainey beating Mick Doohan by just 57 thousandths of a second.

If Marquez wins, he would become the youngest rider (at 21 years and 118 days) to win seven consecutive races in the premier class. Should he achieve it, this is a record he would take away from Rossi, but you can be sure that the likes of Lorenzo, Pedrosa and ‘The Doctor’ himself will do everything in their power to stop the World Champion. We’ve seen some close finishes in Barcelona (2007, 2009 and the aforementioned 1992 spring to mind). Maybe another one is on the cards…

Opening MotoGP™ practice for the Gran Premi Monster Energy de Catalunya begins at 9:55am local time (GMT +2) on Friday 13 June, with the Grand Prix commencing at 2pm on Sunday 15 June. All of the action can be followed live on motogp.com.

Tito Rabat will be looking to defend his Moto2™ World Championship lead in front of a home crowd as the intermediate class descends on Barcelona this weekend.
Rabat, who finished third overall in Moto2™ last year, has enjoyed an extremely strong start to the 2014 campaign: four pole positions from six, winning half of the races and failing to finish off the podium only once – and even then he was classified in fourth position.

Curiously, last time out at Mugello marked his first fastest race lap of the campaign to date. He now targets a first Catalunya race victory, having finished second last season and tucked tight up behind team-mate Pol Espargaro at the finish.

The only rider other than Rabat who could lead the standings coming out of Barcelona is his Marc VDS Racing Team partner Mika Kallio, who since the Italian Grand Prix has also taken part in a day of testing at Mugello. The Finn currently sits 22 points in arrears of Rabat, meaning that he must win at the Circuit de Barcelona-Catalunya to stand any chance of heading up the championship table.

At the same time, others will be looking to challenge the championship-leading Marc VDS duo: Maverick Viñales and Luis Salom, for instance, now complete with yellow liveries following the confirmation of their new title sponsor. In fact, a titanic fight is emerging for third in the Riders’ Championship as Viñales, Dominique Aegerter and Simone Corsi are covered by just three points. Salom lies sixth and ten points behind his team-mate, having out-performed Viñales in Italy last time out. Also looking to challenge once again is reigning World Supersport champion Sam Lowes, who achieved a remarkable front row start amid the Tuscan surroundings of Mugello.

Curiously, from four Moto2™ races at the Circuit de Barcelona-Catalunya so far since the category was inaugurated in 2010, as many different nationalities of rider have won the Grands Prix on behalf of Japan (Yuki Takahashi), Germany (Stefan Bradl), Italy (Andrea Iannone) and Spain (Pol Espargaro). Could another nation have a say this weekend? The likes of Finland and Mika Kallio will certainly hope so…

This weekend sees the stampede that is the Moto3™ World Championship charging its way towards the Circuit de Barcelona-Catalunya off the back off a record-breaking finish to the Italian Grand Prix two weeks ago.

Remarkably, the finish to the 2014 Mugello race marked the closest ever – in any category of the World Championship that has ever existed – for the first three riders over the line: Romano Fenati, Isaac Viñales and Alex Rins were covered by just 0.010 seconds. Perhaps even more incredible is the fact that, when reviewing the list of the ten closest ever top three finishes, no less than 60% of them have occurred at Mugello thanks perhaps chiefly to its long run out of the final Bucine corner.

With Mugello (which itself came after an incredible French Grand Prix at Le Mans) gone but by no means forgotten, Moto3™ now heads on to Round 7 and the start of the second third of the 2014 campaign. Last year in Catalunya, we witnessed a typical 2013 result as race winner Luis Salom was joined on the podium by Alex Rins and Maverick Viñales. This year, it is possible that the first change of championship lead could take place since the Qatar season-opener, as Red Bull KTM Ajo’s Jack Miller now holds an advantage of just five points following his costly non-finish of Mugello; incidentally, the Australian was handed two penalty points for causing the crash.

Breathing down the neck of Miller is the aforementioned Fenati of Sky Racing Team VR46, with Estrella Galicia 0,0’s Rins, SaxoPrint-RTG’s Efren Vazquez (paying the price for his Mugello jump start) and Calvo Team’s Viñales completing the top five. Marquez now finds himself sixth in the standings and a sizeable 44 points in arrears of the leader, as he – along with impressive Junior Team GO&FUN Moto3 rookie Enea Bastianini – was taken out in the Miller incident on the final lap of the Italian Grand Prix. Marquez now has ground to make up as he heads home; and he may now make his own way to the circuit, having recently passed his driving test.

Matching Miller’s trio of wins for 2014 so far, Romano Fenati has become the first Italian to win as three Grands Prix in a single season of the lightweight class since Andrea Iannone did so five years ago. Extraordinarily, after six races this year, the accumulated time between first and second place finishes at all events is just 0.65 seconds: an average of just over one tenth of a second per race. Barcelona also sports a long run to the finish line – how much or little may that number increase by?