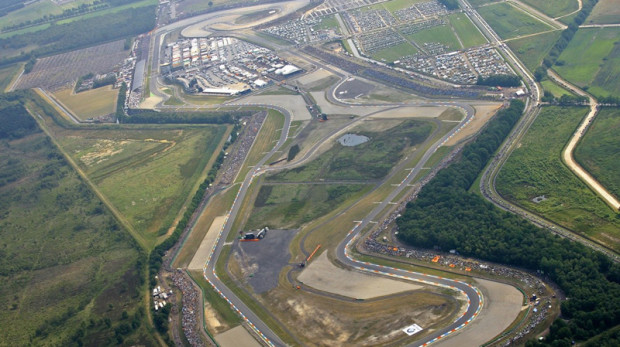 From the sweltering heat of Barcelona the MotoGP™ World Championship heads north to the Netherlands for round eight at Assen, with Repsol Honda’s remarkable young World Champion Marc Marquez still undefeated in 2014.

Marquez may have seen his run of successful pole position qualifying results come to an end at the Barcelona-Catalunya with a Q2 crash – his first of the season – but come race day the 21 year-old delivered the goods again as he won a brilliant battle at the front over Valentino Rossi and Dani Pedrosa.

Spaniard Marquez is now 58 points clear at the top of the standings following his seven race winning streak, with his nearest rival Rossi perhaps looking the most likely to be capable of ending his victorious run.

Last year at Assen Rossi returned to winning ways with his first victory since 2010, delighting the Dutch crowd with a great ride from fourth on the grid. Marquez finished second that day by just over two seconds and he has a good record at The Cathderal of motorcycle racing having notched up three wins at the historic venue in the 125 and Moto2™ categories.

In third place in the standings going into the Iveco Daily TT Assen is Dani Pedrosa, who was in hunt for victory at Catalunya until a last lap error which saw him touch the rear wheel of Marquez. Pedrosa appeared more comfortable and competitive again after arm pump hindrances earlier this season and along with Marquez he will strive to win at Assen for Honda, at what is considered to be a good track for Yamaha.

Last year’s visit to the TT was one to forget for Jorge Lorenzo who battled through the pain barrier to finish fifth, from 12th on the grid, having broken his collarbone in Thursday practice and having flown back to Barcelona for surgery in order to be ready to race. Lorenzo won at Assen in 2010 but has since struggled at the Dutch venue.

Fifth in the current World Championship standings is Andrea Dovizioso who has been in the top ten at every race so far, in contrast to his Ducati Team colleague Cal Crutchlow who will go in search of a good result at round eight, having had a difficult time since his arrival with the Italian factory.

The likes of the Espargaro brothers, Pol (Monster Yamaha Tech3) and Aleix (NGM Forward Racing), will be hunt for more crucial championship points, whilst Stefan Bradl (LCR Honda MotoGP) and Alvaro Bautista (GO&FUN Honda Gresini) are riding to secure their racing contracts for 2015 and potentially beyond.

Bradl returned to form at Catalunya with a solid ride to fifth and his aim is to stay ahead of the likes of Andrea Iannone (Pramac Racing) and Bradley Smith (Monster Yamaha Tech3) and climb higher up the standings in the top ten.

Danilo Petrucci (Octo IodaRacing Project) will attempt to return from injury at the eighth round of the season, having traveled to Barcelona but having been unable to ride as his fractured left wrist had not recovered sufficiently from his Jerez Warm Up crash earlier this year.

No matter what happens at Assen this weekend, Tito Rabat will continue to lead the Moto2™ World Championship. With the summer break fast approaching, his rivals will be determined to reduce the margin at the most historic Grand Prix circuit of them all.

After another great win last time out at the Circuit de Barcelona-Catalunya, Rabat has extended the intermediate class championship lead to 34 points over his team-mate Mika Kallio. With 25 on offer for a win, it takes no mathematician to realise that the Spaniard’s lead is invincible this coming weekend. With this in mind, the likes of Finland’s Kallio and Spain’s Maverick Viñales of Paginas Amarillas HP 40 (second and third in the standings and the only two races winners other than Rabat so far this year) must respond now.

Previous Moto2™ World Champions have experienced mixed fortunes at Assen within their title-winning seasons. Toni Elias may have finished second in 2010, but there was a non-finish for Stefan Bradl in 2011. Marc Marquez saw the chequered flag in fifth position in 2012, with Pol Espargaro then becoming the first rider to win the Dutch event en route to the Moto2™ title last year. Perhaps trivia like this will generate some promise for those chasing Rabat, who at home in Catalunya achieved the absolute clean sweep of victory from pole, setting the fastest lap along the way.

Many will be hoping they made progress at the post-race test in Barcelona. Dominique Aegerter (Technomag carXpert) continues to lead the way for Suter as three Kalex bikes lock out the top three of the championship; the Swiss now has MotoGP™ experience under his belt too, having racked up a mammoth 89 laps with Avintia Racing during the Barcelona test. Fifth in the overall classification is the consistent Simone Corsi for NGM Forward Racing, while Luis Salom was extremely fortunate to escape from his Barcelona race crash with only an injured finger; while the incident took both himself and Jonas Folger out of the Grand Prix, the former was also forced to miss the test on the following Tuesday. Tom Luthi also hopes for good fortune – perhaps a repeat of his Assen podium finish of four years ago.

It looked almost certain that Jack Miller would relinquish the Moto3™ World Championship advantage to Romano Fenati during the closing stages of the Catalan Grand Prix, but the Australian would again pull a rabbit out of the hat to continue leading as the battle moved on to Assen.

It was Alex Marquez who won at the Circuit de Barcelona-Catalunya for Estrella Galicia 0,0, picking up a first Honda-powered lightweight class victory since 2012 and in the process ending a remarkable run of success for KTM. It also marked the first victory for Emilio Alzamora’s team since it switch from Austrian to Japanese power at the start of this year, as well as allowing brothers to win World Championship Grands Prix on the same day for the very first time in the history of the series which inaugurated in 1949.

Perhaps ride of the day in Catalunya went to Enea Bastianini (Junior Team GO&FUN Moto3), the youngest rider in the field, who picked up a first podium. Ironically, it had been Marquez and Bastianini who were taken out of action in the final lap crash at Mugello two weeks earlier. In third was Efren Vazquez for SaxoPrint-RTG, finishing on the rostrum for the fourth time at seven races so far this campaign. Timing again proved critical for Miller, who after running eighth for much of the Barcelona race shot into fourth place as he took advantage of final lap dramas, such as the amazing off-track excursion and consequent save of Niklas Ajo which also removed Jakub Kornfeil from podium contention.

With seven events down, 11 to go and the customary summer break now only two races away, the lead for Red Bull KTM Ajo’s Miller is seven points over Sky Racing Team VR46’s Fenati, with Vazquez 25 points in arrears of the lead (the exact equivalent of one race win). A further seventh behind is Marquez in fifth position, now just two in arrears of his team-mate Alex Rins who lost a chance at victory last time out due to a broken gear-changer.

Moto3™ now moves on to historic Assen for its third race there since the class took over from 125s back in 2012. Last year, Miguel Oliveira memorably picked up the first Moto3™ pole position for Mahindra Racing – only the second in the World Championship for the Indian manufacturer, which had previously clinched a 125 pole with Danny Webb. Just four tenths of a second covered last year’s top five, with Luis Salom winning from Maverick Viñales, Rins, Oliveira and Marquez in classic Moto3™ fashion.

Opening free practice for the 2014 Moto3™ Iveco Daily TT Assen begins at 9am local time (GMT +1) on Thursday 26 June, with Saturday’s race coming at 11am.