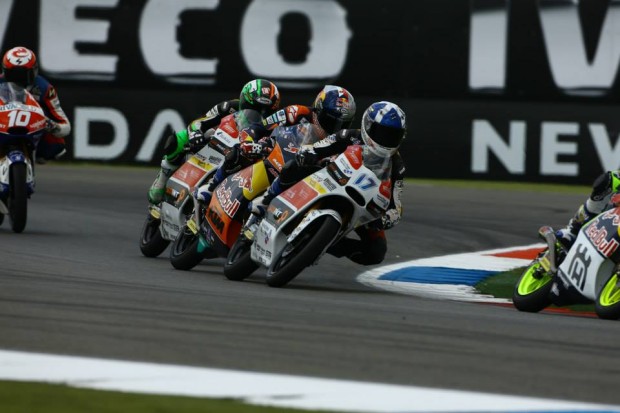 John McPhee rode hard to secure a top ten finish in today’s race at the Circuit of Assen… His result increased his championship total by six points with his tenth position.

A chasing pack fought right through to the end, though only Rins, Marquez and Oliveira could escape at the front. This pack, including the SAXOPRINT RTG rider, battled for positions 4 till 12.

The race of this big group was marked by many changes in position and many crashes. Even the two current championship leaders Miller and Fenati did not finish the race.

Whilst running as high as fourth, John eventually found himself at the rear of the chasing pack.

John McPhee
“It was a really fun race from the first lap till the end. The last part was the best part I have ever had. But I am a bit disappointed to not finish higher up. You needed a little bit of luck in the end to finish on top of this group, because everybody goes crazy on the last lap. But I am also happy. I moved up in the championship and got another top ten position. I learned a lot in the race and I hope at Sachsenring I will improve again.”