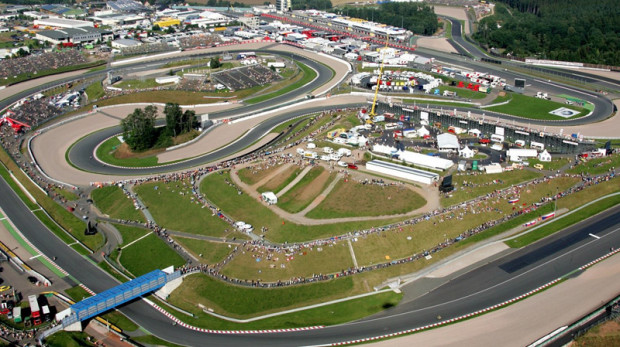 If Marc Marquez keeps winning, he will wrap up this year’s MotoGP™ world title at MotorLand Aragon – regardless of what his rivals do. In order to do that, the Spaniard would need to claim a fifth straight victory at Germany’s Sachsenring this weekend.

21-year-old Marquez is no stranger to the Sachsenring. In fact, he’s won there on his last four attempts: in the 125 class in 2010, in the Moto2™ class in both 2011 and 2012 and in his first MotoGP™ German Grand Prix last year. On each of those occasions he was coming from pole position. With this in mind, it is fair to say the odds are in his favour for another good weekend, having proven unbeatable across the first eight Grands Prix of 2014. If he pulls it off, he will have won every single event across the opening half of the premier class season, and in varying circumstances.

Marquez has already become the 13th most successful rider of all-time (across all World Championship classes to have ever existed) in terms of GP wins, having celebrated his 40th victory in mixed conditions at Assen two weekends ago. He now targets a 25th MotoGP™ podium, having already equalled the totals of great names John Surtees, Luca Cadalora, Jack Findlay and Carlos Checa. On top of this, the Cervera-born Catalan has become the first rider to claim eight straight wins since the MotoGP™ category was introduced at the start of 2002…and he is in good company, with only six other riders in history having won eight or more Grands Prix in a single season: the surnames are Hailwood, Agostini, Doohan, Rossi, Stoner and Lorenzo…

In what has fast become the ‘best of the rest’ battle for second overall, things could not be closer. Valentino Rossi heads to Germany with a fresh two-year deal signed and sealed, binding him to Movistar Yamaha MotoGP until the end of 2016. He now shares second in the standings with Marquez’s Repsol Honda Team partner Dani Pedrosa, although the gap to the leader is a mammoth 72 points. However, should Rossi finish on the podium, he will become the first rider ever to rack up 4,000 career points. Bearing in mind this will be the 76th GP staged in Germany – a nation that boasts more Grand Prix history than most – this may seem only fitting.

In fourth place, Ducati Team’s Andrea Dovizioso is well over a century of points in arrears of Marquez, but upbeat again following the red team’s best result since Misano 2012 – he finished second last time out. Fifth overall is Jorge Lorenzo, having admitted post-race in The Netherlands that he had been distracted by conditions which reminded him of the weather in which he broke his collarbone a year earlier.

With the help of colleagues in Moto2™ and Moto3™, the likes of Marquez, Pedrosa or Lorenzo could make more history this weekend. Should all three races at the Sachsenring be won by Spanish riders, the nation would become only the second (after Italy) to win a total of 500 World Championship Grands Prix, with 90-times race winner Angel Nieto having contributed to the majority of them thanks to his immense success in the 125cc, 80cc and 50cc categories. It could prove to be a rather special weekend, should the ‘Marcha Real’ play out three times on the podium.

Opening practice for the 2014 MotoGP™ eni Motorrad Grand Prix Deutschland commences at 9:55am local time (GMT +2) on Friday 11 July, with the race coming up at 2pm on Sunday 13 July. All of the action can be followed live on motogp.com

Just a single destination remains on the 2014 Moto2™ World Championship calendar before the habitual summer break, followed by a trip west towards Indianapolis as the second half of the campaign kicks off. For now, Germany’s Sachsenring is the venue.

Last year in Germany, it was a weekend of firsts for the intermediate class. Belgium’s Xavier Simeon clinched the first and so far only pole position of his career on Saturday before Spain’s Jordi Torres took a first (and also so far only) Grand Prix victory on Sunday, leading home Simone Corsi and Champion-to-be Pol Espargaro.

Fast-forward by 12 months and Moto2™ is returning to the Sachsenring off the back of a truly memorable race at Assen. Australia’s Anthony West was man of the moment, winning from 23rd position on the grid to become the 20th different race victor in Moto2™ since the category began in 2010. Picking up his second career victory 11 years to the day after the first, it ironically came at the same circuit. This became a new record for the time gap between a rider’s first and second career wins, as well as the longest ever margin between two single victories in any rider’s career.

As for Tito Rabat, there is good and bad news. The bad news is that, at Assen, for the first time in his career he failed to finish either first or second after starting a Grand Prix from pole position. Eighth place may have felt like scant reward at the time, although those critical eight World Championship points may prove crucial by the time the final chequered flag falls in Valencia this November. On a brighter note, the result ensured that the Spaniard’s overall Moto2™ leadership remains impregnable in Germany this weekend, no matter what happens across the race distance.

Winning at the Sachsenring doesn’t always guarantee a Moto2™ title. Sure enough, Toni Elias and Marc Marquez may have picked up race victory in Germany en route to their intermediate class crowns of 2010 and 2012, respectively, although in 2011 and 2013 Stefan Bradl and the aforementioned Pol Espargaro would have to settle for second and third positions; nonetheless, these were vital points in their pursuits of the titles. This is something Rabat may bear in mind this weekend, having never finished on the podium at the circuit located a stone’s throw from Chemnitz.

Just one race remains before the Moto3™ World Championship meets its halfway point in 2014. Following the high drama of Assen, no less than five riders could top the overall standings as the season heads into its customary summer break.

Perhaps amazingly, neither Jack Miller nor Romano Fenati scored points in what proved to be a highly memorable Assen TT. The result? Seven points remain between the Australian and Italian atop the classification. However, their Dutch misfortunes also mean that Alex Marquez, Alex Rins and Efren Vazquez are now all within 15 points of the leader. Any one of them could lead the way heading, not just into the break, but also into Indianapolis on the second weekend of August.

That means this is the closest top five fight at this point of the season in the lightweight tier for nine years; back in 2005, the quintet was made up of Mattia Pasini, Gabor Talmacsi, Tom Luthi, Mika Kallio and Marco Simoncelli.

Not only this, but the battle is also intensifying in the Constructors’ Championship. The last round saw Honda claim its first lightweight class one-two finish (as both bike and engine manufacturer) since the 125 Australian GP of 2005. Thanks to both this feat and the previous victory for Alex Marquez in Barcelona, the Japanese company has moved to within 19 points of Austrian rivals KTM in a nail-biting contest.

Now the five-way dispute rumbles its way on into the former East Germany, with Miller having led from the off in Qatar but now with more rivals than ever looking to threaten. Fenati has won as many races as Miller, Marquez carries the momentum as the latest double victor and Rins quietly sits fourth as the nearly man and championship runner-up of 2013. As for Vazquez, he has made up ground; like Rins, he is yet to claim a victory this year (or indeed any in his World Championship career to date), but – as Maverick Viñales proved last year – it is consistency that wins titles.

First Moto3™ practice for the eni Motorrad Grand Prix Deutschland begins at 9am local time (GMT +2) on Friday 11 July, with the race at 11am on Sunday 13 July.