John McPhee carves through the field at Sachsenring to take 7th 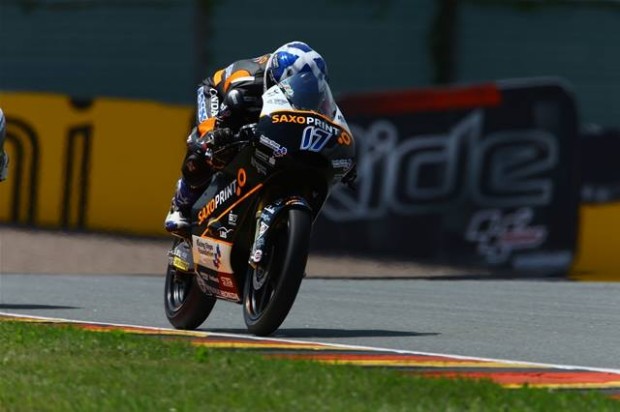 Today’s Moto3 race at the German GP at Sachsenring saw John McPhee carve his way through the field from 27th on the starting grid right up to 7th across the finish line.

In some previous races, starting from further down the grid has seen John’s race compromised by midfield battles and skirmishes – getting caught up with other riders and preventing him from showing true pace. But today’s race proved very different.

John was quick off the start and by lap 2 was already up to 20th place. With 23 laps of the 27 lap race left to go, John had made his way right through to 12th place and was running nose to tail with teammate Efren Vazquez.

Soon on the back of the main pack, chasing for 6th place, John spent the middle of the race swapping places with Isaac Viñales and was in 10th with 15 laps remaining.

As the race headed into its final ten laps, John was able to move away from Aspar’s Juanfran Guevara – and was able to take advantage of a crash between Karel Hanika and Miguel Oliveira to move even further up.

Battling with the pack continued right up to the line, and John crossed the line in 7th, deservedly happy with an excellent and spirited ride.

John McPhee
“It was brilliant fun really. There were no real nerves at the start because, starting that far back, I didn’t really think I had a chance of getting into the top ten – so I was just calm and got on with it it. I’m really over the moon with the result.
It was great racing with Efren towards the end too. On the last lap I showed him a wheel and went up on the inside of him – but he saw me and must have thought ‘I’m not letting him through’ and got back past me.
It’s all more points on the board and another step forward.”