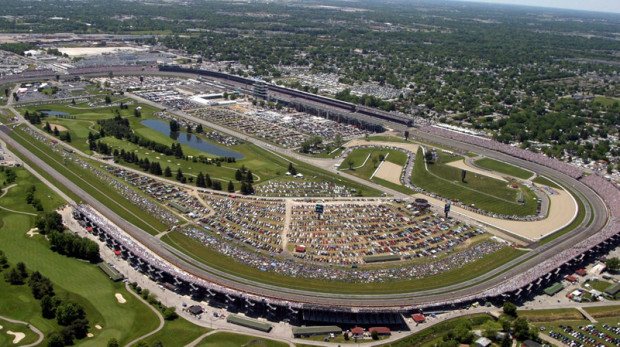 The MotoGP™ World Championship returns to action after a summer break this coming weekend, with the Red Bull Indianapolis Grand Prix marking Round 10 of the 2014 season.

This will be the seventh successive year that MotoGP has visited the famous Indianapolis Motor Speedway venue and since last season some modifications have taken place. The IMS MotoGP layout has been redesigned to create a 16-turn, 2.591-mile (4.170-kilometre) circuit with exciting new turn configurations and braking zones, creating more passing opportunities.

Turns 3, 4, 7, 15 and 16 have been reconfigured and the entire infield section of the circuit has been repaved to create a more uniform and smooth racing surface. Compared to the previous circuit, the new one is slightly shorter overall (by 0.03 miles / 0.048 km) but retains its 16-turn layout (ten left-handed turns, six right) and anti-clockwise racing direction.

As the riders return from a three-week holiday after Round 9 in Germany, they will hope to quickly find the optimum setup for their racing prototypes through the updated sections of track and all eyes will be on undefeated World Champion Marc Marquez as he seeks to maintain his winning form.

A run of nine straight wins in the first half of the season has given Marquez a significant 77-point lead over Repsol Honda team-mate Dani Pedrosa in the standings and a considerable psychological advantage over his title rivals. Marquez has also won every premier class race in which he has competed in the United States and his 2013 IMS victory was part of a four-race winning streak which strengthened his historic title challenge during the middle part of the campaign.

So can anyone beat him at Indy or over the forthcoming rounds? That is the challenge which the likes of Pedrosa and Movistar Yamaha MotoGP pair Valentino Rossi and Jorge Lorenzo have in front of them.

Rossi sits third in the standings – seven points behind Pedrosa – and if he cannot beat Marquez this weekend he will at least hope to make it onto the podium at Indianapolis, having missed out at Assen and the Sachsenring. Incidentally, Rossi was the winner of the inaugural MotoGP visit to Indy in 2008.

Lorenzo’s five MotoGP podium finishes at the Indianapolis circuit – including victory in 2009 – is more than any other rider. The 2010 and 2012 MotoGP World Champion will look to move up from fifth in the standings in the second half of the season.

Meanwhile, currently sitting fourth and 14th respectively in the championship, Ducati Team’s Andrea Dovizioso and Cal Crutchlow each have their own specific targets to meet as racing resumes. Dovizioso is confirmed to continue with Ducati for two more years and aims to build on his good start to 2014, whilst Crutchlow has been announced as switching to Lucio Cecchinello’s LCR Honda MotoGP for 2015 and looks to recover form and fitness after double arm surgery post-Sachsenring.

Meanwhile the likes of Aleix Espargaro (NGM Forward Racing), Pol Espargaro (Monster Yamaha Tech 3), Andrea Iannone (Pramac Racing), Stefan Bradl (LCR Honda MotoGP) and Alvaro Bautista (GO&FUN Honda Gresini) will jostle for points and to finish as high up the top ten as possible, with Iannone now having been confirmed as joining Dovizioso as a factory Ducati rider for next season.

American rider Nicky Hayden (Drive M7 Aspar) unfortunately misses the Indianapolis round as he recovers from wrist surgery and he will be replaced by Briton Leon Camier on the Honda RCV1000R.

Meanwhile, this will be the last ever ride on home territory for popular veteran Colin Edwards, with the NGM Forward Racing man set to retire from MotoGP at the end of 2014.

An intriguing Moto2™ season resumes at the Red Bull Indianapolis Grand Prix, with Tito Rabat leading the title battle, but with plenty of his fellow intermediate class competitors having also shown their class in the first half of the year.

Indeed, over the first nine GPs, Moto2™ wins were registered by five different riders: four for Rabat (Qatar, Argentina, Mugello and Barcelona-Catalunya), two for Mika Kallio (Jerez and Le Mans) and one each for Maverick Viñales (Circuit of the Americas), Anthony West (Assen) and Dominique Aegerter (Sachsenring).

Although the first World Championship event at Indianapolis was staged in 2008, the first intermediate class race did not come until one year later, as the scheduled inaugural edition of the 250cc race was delayed and eventually cancelled as the remnants of Hurricane Ike hit the Speedway.

Last year Rabat won the race at Indy and the Marc VDS Racing Team rider will look to extend his 19-point lead over team-mate Kallio as the title fight rages on.

The likes of Viñales (Paginas Amarillas HP 40) and Aegerter (Technomag carXpert) strive for further Grand Prix wins as they look to cut their respective 50 and 74-point deficits to Rabat at the top of the standings. In fifth place overall is experienced Italian Simone Corsi (NGM Forward Racing), who is still looking for his first victory in Moto2.

Aiming to outperform his Paginas Amarillas HP 40 colleague and fellow rookie Viñales at IMS is Luis Salom, who will celebrate his 23rd birthday on the Thursday before the Indianapolis Grand Prix and would love nothing more than to do so with what would be a maiden intermediate class race win on Sunday.

The performances of Red Bull KTM Ajo’s Jack Miller have made plenty of headlines in Moto3™ so far this year and the talented young Australian rider will return from the post-Sachsenring break in high spirits, as he works to maintain the form which has given him a 19-point championship lead.

Although the gap between winner Miller and second place finisher Brad Binder was only 0.180 seconds in Germany, this was the second largest winning margin for Miller so far in 2014, as two of his four victories to date – in Texas and Le Mans – have come by less than one tenth of a second.

Those fine margins demonstrate the ongoing competitiveness of the lightweight class. Miller knows he will be pushed hard at Indianapolis and at every round in the second half of the season by the likes of Alex Marquez, Efren Vazquez, Romano Fenati and Alex Rins, who complete the current top five.

Second placed Marquez (Estrella Galicia 0,0) already has two wins to his name this year, whilst Fenati (SKY Racing Team VR46) has tasted victory three times thus far and the Italian still has Miller in his sights from fourth place in the standings.

In third overall, Vazquez (SaxoPrint-RTG) has emerged as a podium contender this year and is desperate for a first Grand Prix triumph, whilst fifth placed Alex Rins (Estrella Galicia 0,0) looks to recapture the 2013 race-winning form which took him to victory at Indy last year.