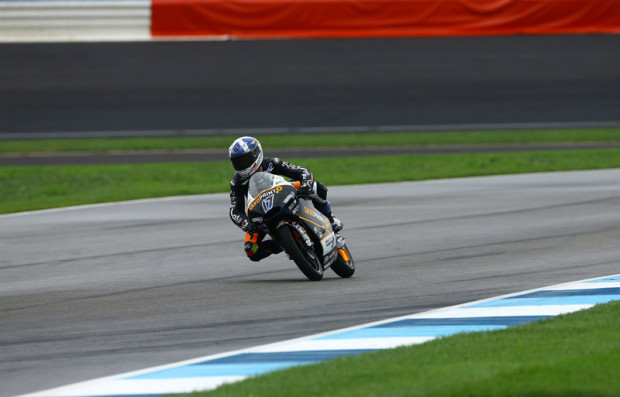 An excellent start to the second half of the season was delivered today in murky Indianapolis by Saxoprint – RTG squad rider John McPhee.

After John showed modest progress in FP1, he attacked in the afternoon’s FP2 session. In difficult wet-dry conditions it was hard to find the right timing and to get a fast lap in.

John solved this issue quickly and within a quarter of an hour after the start of FP2 was up near the top of the timesheets.

Further into the session his positions dropped slightly, but he was fully back on the pace in the last laps with commanding performances.

5th place for John was the eventual and outstanding result on the first day of practice.

John McPhee:
“I missed the start of the first session as we had a problem with the clutch just as the bike came off the stand to go out. But the guys did a great job in fixing it and I didn’t miss too much time. With the rain the track conditions were changing all the time so we went for wet settings and worked from there.
Free practice two was a step forward and we just made some small changes to the suspension and these all worked well. I was very comfortable with the feel of the bike and I hope we can move forward with everyone else tomorrow, as I’m sure times will continue to come down.
I like the changes to the track, seems like most of the areas I didn’t like much last year have been improved, So as far as I’m concerned they’ve done a great job!”