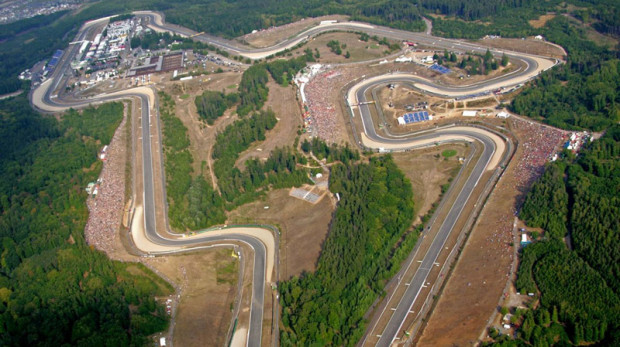 After the return to action from the MotoGP™ mid-season break at Indianapolis the teams and riders head straight back to Europe this week to prepare for the round 11 contest at the bwin Grand Prix České republiky.

The visit to Brno takes the World Championship to one of the most historic venues on the calendar, where racing has been held since the 1930s and the current circuit first held a Grand Prix in 1937.

This time around MotoGP’s current ‘history maker’ Marc Marquez will look to extend his winning run to 11 consecutive victories after another fantastic display at Indy. The only other previous rider to have won the opening ten races of the premier class season is the great Giacomo Agostini, the Italian did so in 1968, 1969 and 1970, so Marquez has the chance to set yet another new record this weekend.

All trying to stop him from winning again, at the track where Marquez scored his penultimate victory of 2013, are the likes of Movistar Yamaha MotoGP pair Valentino Rossi and Jorge Lorenzo. Currently sitting third and fourth respectively in the standings Rossi and Lorenzo each hope Brno will give them a chance to finally defeat Marquez, after they both joined the Repsol Honda rider on the podium Indianapolis.

On the other side of the Repsol Honda garage Dani Pedrosa did not quite get in hooked up at Indy and finished fourth, to maintain his second place in the standings. Like Marquez Pedrosa tested at Brno in the summer following round nine at Sachsenring and he will be hoping for at least a podium result on Sunday.

Ducati Team pair Andrea Dovizioso and Cal Crutchlow will look for better than the respective seventh and eighth place finishes they got at round ten, whilst Monster Yamaha Tech 3 teammates Pol Espargaro and Bradley Smith will aim to build on their top six finishes in the States. Smith will need treatment on a finger injury this week, having aggravated an old wound in a crash on Saturday.

Leon Camier was unlucky not to finish the Indy race on his MotoGP™ debut and he will get another chance in the Czech Republic as he rides in place of Nicky Hayden with Drive M7 Aspar. Meanwhile, Alex de Angelis will make a return to the premier class, as he steps in to replace Colin Edwards at NGM Forward Racing.

Camier and De Angelis are also both included on the list of riders scheduled to remain at Brno for a post Grand Prix day of testing on Monday.

Marc VDS Racing Team colleagues Mika Kallio and Tito Rabat will continue their Moto2™ World Championship battle this weekend, with the Finn having closed the gap on the Spaniard to just seven points at Indianapolis.

Rabat has four wins and six podiums to his name already this year, but has finished eighth, fourth and fourth in his last three races, just as Kallio has hit form. That the main threat to his championship ascendancy comes from within his own team only makes the title battle more intriguing.

The experienced Kallio is on a run of three podium results and he produced a masterclass at Indianapolis having secured pole on Saturday. The former MotoGP™ class competitor raced away from the top of the grid not once, but twice, as the Indy Moto2 race was restarted, leading from start to finish in the shortened 16-lap contest. Kallio also won last year’s race at Brno and he will arrive at round 11 with his confidence high.

Behind the Marc VDS Racing Team pair in the standings is impressive rookie and Moto3™ World Champion Maverick Viñales, who has adapted rapidly to the intermediate class. Viñales is the subject of much speculation about a potential 2015 move into MotoGP and it is easy to see why given the form which has taken him to second place in three of the last four races.

Viñales’ Paginas Amarillas HP 40 colleague Luis Salom was the Moto3 race winner last year in Brno and he will be looking for a decent points haul on Sunday after race incidents hindered his progress at Indianapolis. Salom currently sits eighth in the standings.

On the podium again at round ten was the impressive Dominique Aegerter (Technomag carXpert), with the Swiss rider sitting fourth overall in the championship as he heads to Brno, where he has not achieved great results in the past. Meanwhile the experienced Simone Corsi (NGM Forward Racing) still searches for his first Moto2 victory from fifth in the standings having recorded his seventh top five result of the year at the Brickyard.

With Alex de Angelis mavign back up to MotoGP for the rest of the season he will be replaced in Moto2 at Brno by Riccardo Russo in the TASCA RACING Moto2 team.

Although he had to settle for third place at round ten at Indianapolis, Jack Miller extended his Moto3™ standings lead to 21 points with eight races remaining.

The Australian youngster made it six podiums from the opening ten rounds on Sunday in a highly competitive lightweight class and the rest of the field still look at him as the main man to beat as they head to Brno.

Miller featured in another brilliant battle at the front in Indianapolis with all the championship contenders fighting for the victory and with Efren Vazquez finally claiming the win in his 116th Grand Prix.

The result saw the SAXOPRINT RTG man move up to second in the standings behind Red Bull KTM Ajo rider Miller and Vazquez is sure to remain a big threat throughout the second half of the 2014 World Championship.

Third overall in the standings is Alex Marquez (Estrella Galicia 0,0) who crossed the Indy finish line only a second behind race winner Vazquez in second place.

Indeed Marquez trails Vazquez by only four points in the overall tally, whilst just three further points back is talented Italian Romano Fenati (SKY Racing Team VR46) who missed out on victory himself by just 0.065s in second place at round ten, such are the fine margins in the class.

Fenati has not won since Mugello and would dearly love to return to winning ways at Brno. Behind Fenati’s in the championship is Alex Rins (Estrella Galicia 0,0) who came strong in the second half of 2013 but has not scored a victory since Phillip Island last year.

Rins has four podium results to his name in 2014, but he needs to get back to winning races if he is to claw back a 40 point standings deficit to leader Miller.