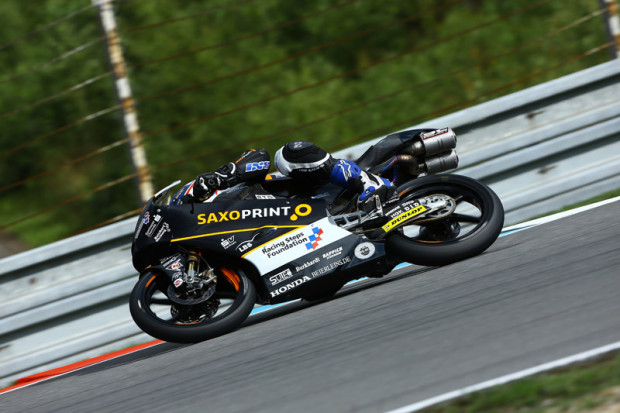 Conditions at Brno for this morning’s 19 lap Moto3 race were cool and dry at the outset.

John McPhee started from 11th place, the centre spot on the fourth row of the grid, dropping one place to 12 through the first few corners, passing Romano Fenati back into 11th later in the opening lap.

Sadly though John was taken out in a crash into Turn 1 of lap two, in an incident once again caused by Marc VDS Racing rider Jorge Navarro. He escaped with minor injuries, but it was another race ruined by the Spanish newcomer.

As with the previous incident at Indianapolis, it was an impetuous and poorly judged move by Navarro that caused the crash – once again trying an impossible move as the tight field funnelled into the corner.

“Navarro’s an idiot – it’s as simple as that. That was a stupid move. I know he’s new to the class, but you still need to have a bit of sense, and he’s not riding with any.
He came right around the outside of about three or four of us. I was on the inside and I had my line and felt in a comfortable position but he just kept tipping it in and we made contact. I was trying to squeeze the brakes and keep it turning in. I felt the contact but he just kept tipping in and tipping in, and then he caught my front wheel and took it away.
That’s the second race in a row he’s taken me out, which isn’t on. He needs to get a bit of sense.”

Brno is the second race in a row where hopes of a good performance by John have been left in tatters by being on the receiving end of over-ambitious moves by the inexperienced Navarro.

Hopefully John can fare much better in his home race at Silverstone at the end of the month.