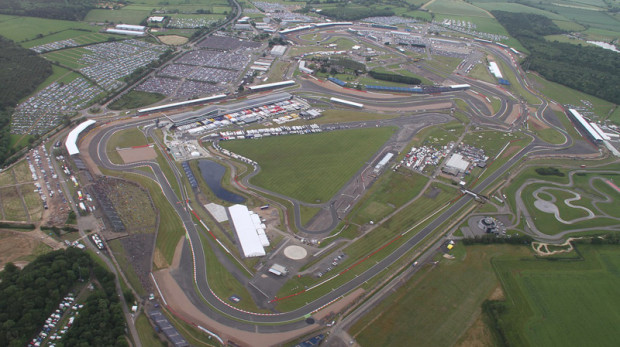 The Hertz British Grand Prix at Silverstone will be the first event on the MotoGP™ calendar to welcome a winner other than Marc Marquez, as it was Repsol Honda Team partner Dani Pedrosa who claimed victory last time out at Brno. For a number of reasons, it looks set to be another historic weekend.

With Pedrosa having won the Czech Grand Prix for the second time, Honda has now established a new record for the longest sequence of successive wins by one manufacturer since the MotoGP class was introduced at the start of 2002; although Marquez may have narrowly missed out on becoming the first ever rider to win the opening 11 races of a season, his team still holds a 100% win record for 2014 so far.

Last year at Silverstone, the Northamptonshire circuit witnessed one of the most memorable duels in living memory as Marquez went head-to-head with Jorge Lorenzo, a battle which saw the Yamaha rider beat his rival by less than one tenth of of a second. The Movistar Yamaha MotoGPtwo-time World Champion rider will now be looking to follow in the footsteps of Pedrosa by claiming his first victory of the campaign, while in the process searching for an 80th podium finish in the top tier of Grand Prix racing; only Valentino Rossi, Mick Doohan, Dani Pedrosa and Giacomo Agostini have more.

As for Rossi, the Italian is set to officially become the most experienced rider to have ever contested the 500cc or MotoGP class. He will start his 246th Grand Prix this weekend, surpassing the 245 starts of Alex Barros; ironically, this will happen exactly 17 years to the day since Rossi clinched his first world title in the 125cc class at Brno in 1997. He debuted in the premier class in 2000 and since then has amassed a remarkable 80 Grand Prix victories, 154 podium placings, 49 pole positions, 68 fastest race laps and seven world titles. Although he has never won at Silverstone, ‘The Doctor’ triumphed at Donington Park on no less than seven occasions between 1997 and 2005, including his first 500cc win in 2000.

From a British point of view, there is a lot to shout about as five home riders will line up for the race. This time it will be Cal Crutchlow, Bradley Smith, Scott Redding, Michael Laverty and Leon Camier, whereas in 1996 – the last time as many riders contested their home British Grand Prix – the names in question were those of James Haydon, Chris Walker, Eugene McManus, Jeremy McWilliams and Terry Rymer. And could Silverstone perhaps witness a local name on pole position? Only the late, great Barry Sheene has ever done that, in the 500cc Grand Prix of 1977.

Opening free practice for the 2014 Hertz British Grand Prix will start at 9:55am local time (GMT +1) on Friday, with Sunday’s race starting at 1pm local time.

An enticing fight is emerging for this year’s Moto2™ title, as Marc VDS Racing Team’s Tito Rabat and Mika Kallio go head-to-head. Following on from their second one-two result of the season at Brno, Silverstone will host the 12th encounter.

Last time out, the Czech Grand Prix saw Spaniard Rabat winning from Kallio in a controlled performance, while the Finnish rider fought up to second place from sixth on the grid and despite crashing both in qualifying and the Sunday Warm-Up session. This leaves 12 points between the duo with seven Grands Prix still to go. Last year, they finished fourth and sixth at Silverstone, but one doubts this happening again.

Elsewhere, Sandro Cortese travels to England fresh from his first podium finish in the intermediate category, while manufacturers Suter and Kalex are now locked together on 30 race wins apiece. Who will be first to hit 31? Arguably Kalex is the favourite, having won three of the four Moto2™ races to have been staged at Silverstone since 2010. Perhaps local fans will be hoping for Speed Up success, though, as that could signal a home victory for Sam Lowes who crashed out of a podium position at Brno. Incidentally, it is Moto2™ that has delivered one of only two home Grand Prix successes at Silverstone, when Scott Redding triumphed in glorious fashion last year.

Could a 25th birthday provide winning motivation for Xavier Simeon as the Belgian looks to return to the podium for the first time since Argentina? He is not the only rider hunting for a return to the top, as the likes of Paginas Amarillas HP 40 pairing Maverick Viñales and Luis Salom are keen for a return to the rostrum, as are Switzerland’s Tom Luthi and Dominique Aegerter who at Brno put on a spectacular show with their battle for fourth position. And what of Anthony West? Bearing in mind the events of Assen, the Australian would encourage a British rain shower.

At Mapfre Aspar Team Moto2, a familiar surname will return to the World Championship in the form of Mamola. On this occasion it is Dakota Mamola, son of 13-time Grand Prix winner Randy, covering for Nico Terol who will miss the race due to physical problems which have arisen from premature muscle fatigue. Mamola has been competing this season in the Moto2™ ranks of the FIM CEV Repsol championship, while Terol hopes to make a full recuperation as soon as possible.

A late addition to the event entry list, Ulsterman Jeremy McWilliams will make a one-off Grand Prix return at the ripe age of 50 as a Moto2™ wild-card riding Brough Superior’s exotic carbon prototype designed by Taylor Made Racing.

First Moto2™ practice at Silverstone is to start at 10:55am local time (GMT +1) on Friday, while Sunday’s race starts at the earlier time of 11:20am local time.

The lightweight class of the World Championship has welcomed two brand-new winners in as many Grands Prix, as the recent Indianapolis-Brno double-header saw experienced heads Efren Vazquez and Alexis Masbou win for the first time.

In his first Grand Prix as a married man, Vazquez (who is set to celebrate his 28th birthday on the Tuesday after the British Grand Prix) triumphed at the world-famous Indianapolis Motor Speedway in World Championship race start 116, while Masbou established a new record for the longest time between career race debut and first Grand Prix victory: the Frenchman’s Brno win came in his 133rd Grand Prix start.

At Brno, other new records were also achieved: notably the fact that the margin of 1.944 seconds marked the smallest gap ever between the race winner and 16th place finisher, beating a record originally established in the 125cc Italian GP at Mugello in 1999. Towards the front of the Brno group, Red Bull KTM Ajo’s Jack Miller finished fifth to extend his championship lead to 23 points over Estrella Galicia 0,0’s Alex Marquez, whose team-mate Alex Rins had thrown victory out of the window by inadvertently celebrating while running in the lead at the end of the penultimate lap.

Thanks to the successes of Vazquez and Masbou, Honda has now decreased KTM’s Constructors’ Championship lead to just 18 points, while Husqvarna has closed to within 15 points of third-placed Mahindra thanks to Danny Kent’s podium finish in the Czech Republic. This marked both Kent’s first rostrum result since returning to the Moto3™ class and Husqvarna’s first top three finish for 42 years; the marque last made the podium in 1972, with Bo Granath in his home Swedish Grand Prix.

Familiar face Jasper Iwema will be making a wildcard return this weekend with KRP Abbink Racing, while Britain’s own Joseph Irving lines up with the Redline Motorcycles/KTM UK team. At Mahindra Racing, in the meantime, Arthur Sissis will be replaced by Italian Andrea Migno for the rest of the 2014 season.

Opening Moto3™ practice for the Hertz British Grand Prix starts at 9am local time (GMT +1) on Friday. Sunday’s race will run to a modified time schedule, coming up after MotoGP™ and starting at 2:30pm local time.