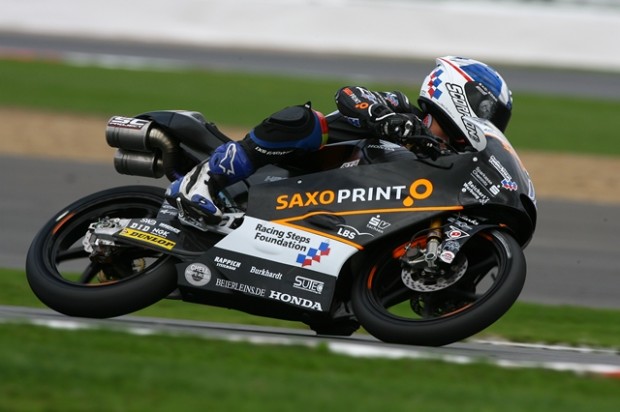 Both SAXOPRINT RTG riders had a lot of problems in this morning’s FP3 session in Silverstone. John McPhee was able to pip his teammate to the post, as he already did yesterday. But more than an 18th place was not possible. Efren finished two places further down.

Also qualifying didn’t show much improvement. Both riders are further down the field than they have been all season. Fifteen minutes before the end of the session they only occupied places 13 and 17.

After a stop in the garage and with ten minutes to go, both went back out on track and gave it their all. Unfortunately there was no improvement to position 17 for John. Obviously not the best starting position for tomorrow, so both John and Efren will have a lot of catching up to do during the race.

John McPhee
“Today didn’t go how we planned it. We improved every time, but also the other guys kept going faster. It was difficult, but we kept trying to improve. We changed a lot of things on the bike and I also tried to change my riding style a little, but at the end it wasn’t enough. The position is not good, we need to improve in the race tomorrow, but I believe we can come away with a good result.”