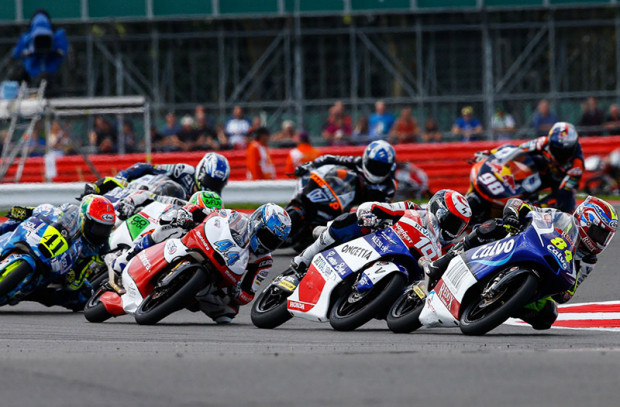 Having made a slightly poor start he wasted no time in getting things back together and was up into 15th place at the end of the first lap of the 17 lap race duration.

John spent the following laps gradually working his way through the field – passing the likes of Danny Kent and Niklas Ajo, and was up into 11th with twelve laps to go.

With ten laps to go John had also made his way up to tenth, as he led the second group – which pretty much hung directly on the end of the leading pack.

With nine laps remaining, John had continued his progress, moving through to a superb sixth in the tight battle of this extended group, subsequently getting shifted back to eleventh.

The constant swapping of places continued with John mainly exchanging positions with Karel Hannika and Isaac Viñales between 11th and 9th.

With six laps to go, John had advanced to seventh as Oliveira and Bastianini fought for the lead along with Rins and Marquez.

With only 3 laps remaining John had been shuffled back to eleventh once again – never giving up in the hectic fray of the second pack of around 10 bikes.

John was in tenth spot going into the last lap, and whilst Alex Rins eventually won the battle for first place, John eventually crossed the line in eleventh, battling right up to the end – with six seconds covering all the points scorers.