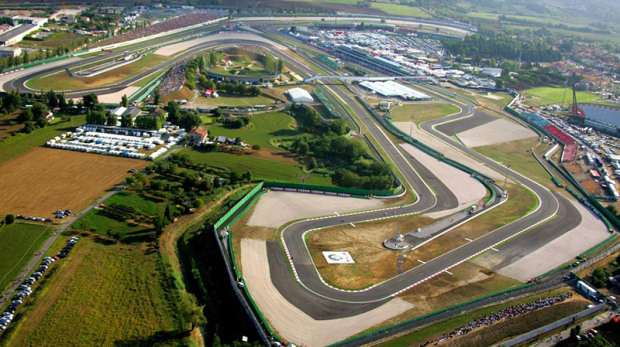 As one of the most colourful events on the calendar, the visit to Misano always produces a fantastic atmosphere with the passionate and vociferous crowd supporting the World Championship’s numerous Italian competitors as they battle for victory.

Ahead of the visit to the Rimini coast, the win by World Champion and runaway standings leader Marc Marquez at Silverstone was the 11th time this year he has stood on the top step of the podium.

That triumph matched the record of MotoGP victories in a single season that was achieved by Valentino Rossi in both the 2002 and 2005 seasons. Another win for Marquez this year and he will equal the all-time record for most wins in the premier-class in a single season, currently held by Mick Doohan from 1997.

Furthermore, victory for Marquez at Misano would edge him closer to retaining his title, with a distinct possibility that the remarkable young Spanish rider could secure the 2014 championship crown in front of his home fans at the following round at MotorLand Aragon.

Looking to stop Marquez again, as the only other rider to have a won a premier class race this season, his Repsol Honda teammate Dani Pedrosa was off the podium in fourth place last time out at Silverstone – unable to repeat his Brno heroics.

Meanwhile, following his third place finish at Silverstone, Valentino Rossi has now scored a total of 4987 points across all classes during his Grand Prix career. If he finishes in fourth place or higher at Misano – his home track – Rossi will become the first rider ever to reach the milestone of 5000 career points in GP racing.

The most successful rider at Misano since racing returned to the circuit in 2007 is Rossi’s Movistar Yamaha MotoGP teammate Jorge Lorenzo, with four victories: the 250cc GP in 2007 and in MotoGP for the last three years. Lorenzo had a great battle with Marquez at the British Grand Prix and will be determined to register his first victory of the year at the Italian circuit this weekend.

As an Italian rider on an Italian machine Andrea Dovizioso is sure to be given great support at Misano as he continues his hard work with the Ducati Team, whilst his teammate Cal Crutchlow will also be aiming for a good result. Between the Brno and Silverstone rounds Ducati tested at Misano, with Andrea Iannone of the Pramac Racing Team also present, meaning they will have plenty of relevant data available.

Elsewhere, Leon Camier is set to make a fourth consecutive substitute appearance for the Drive M7 Aspar team in place of the recuperating Nicky Hayden. Camier just missed out on the points in 16th place at his home round at Silverstone and will relish another chance to race at the top level.

With six races of the 2014 Moto2™ World Championship to come the main threat to championship leader Tito Rabat at the head of the standings is his teammate Mika Kallio.

Round 12 at Silverstone saw an intriguing battle between the Marc VDS Racing Team pair which went right down to the wire, with Rabat getting the better of his Finnish colleague by just +0.063s on the finish line, to take his sixth win of 2014 and extend his overall advantage to 17 points as the riders head to Misano.

Last year at the Italian track Rabat finished on the podium in third place, with Kallio down in ninth position. However, Kallio is having a much better season this year, with eight podiums already in 2014 compared to just four last year.

Indeed Kallio has been on the rostrum at the last five races and has the form to maintain the pressure on his talented colleague Rabat over the remainder of the season.

Behind that dominating front-running pair in the Silverstone race and in the championship standings, rookie Maverick Viñales (Paginas Amarillas HP 40) continues to impress in third place – and at Misano he will be looking to add to his five Moto2™ podiums.

Dominique Aegerter (Technomag carXpert) clipped the back of Viñales’ bike in the Silverstone race and the usually consistent Swiss rider finished the British Grand Prix contest in the unfamiliar territory of 21st place. He will aim to bounce back with a return to the podium at the Gran Premio TIM di San Marino e della Riviera di Rimini.

Unfortunately for NGM Forward Racing’s Simone Corsi he will miss the race in front of the Italian fans, having required an operation to repair an open fracture of the left ulna and damaged wrist tendons after crashing at Silverstone. Corsi will be temporarily replaced by 21 year-old Frenchman Florian Marino in the Forward team for round 13.

Meanwhile, Federico Caricasulo will cover for the injured Tetsuta Nagashima in the Teluru Team JiR Webike team, with the Japanese rider having sustained a broken right tibia and fibula, a dislocated right shoulder and a fracture in his right hip bone in FP3 a the British Grand Prix.

Elsewhere, in the category Nicolas Terol (Mapfre Aspar Team Moto2) will return to action at Misano, having missed the visit to England due to a muscle fatigue issue.

Another familiar face will return to the intermediate class for the final six rounds of the year, as AirAsia Caterham Moto Racing has announced that Ratthapark Wilairot will join the team at Misano. Wilairot will replace Josh Herrin on the Caterham Suter for the remainder of the 2014 season.

As the Moto3™ riders head to Misano it is Jack Miller still in control at the top of the standings, but the young Australian has had two particularly determined Spanish riders hunting him down in recent weeks.

As the Moto3™ riders head to Misano World Circuit Marco Simoncelli for the Gran Premio TIM di San Marino e della Riviera di Rimini it is Jack Miller still in control at the top of the standings, but the young Australian has had two particularly determined Spanish riders hunting him down in recent weeks.

Last time out at Silverstone Miller crossed the line sixth, having finished fifth at Brno and the Red Bull KTM Ajo rider will be looking for at least a podium result at Misano in order to take the initiative in the championship fight once again.

Alex Marquez has not won a race since his back-to-back victories at Catalunya and Assen, but his recent consistent collection of points and his second place finish at Silverstone have seen him close up to within 13 points of Miller at the head of the standings, with six rounds remaining.

On an increasingly competitive Honda Moto3™ machine Marquez crossed the finish line at the British Grand Prix just +0.011s behind his race winning Estrella Galicia 0,0 teammate Alex Rins, who is also still in with a chance of securing the title.

For Rins, his triumph at Silverstone was his first victory since Phillip Island 2013 and he now trails Miller in the standings by 29 points. In truth that gap would have been considerably less had Rins not made a remarkable miscalculation at Brno, where he crossed the line for the last lap in first place, celebrating prematurely and thinking he had won the race, only to finally finish ninth.

Rins was the race winner last year at Misano, with Marquez also on the podium, whilst Miller finished the race fifth.

Behind the leading trio in the championship is experienced Spaniard Efren Vazquez (SAXOPRINT RTG), who since a long awaited first career victory at Indianapolis has finished eighth at Brno and suffered a DNF at Silverstone. Likewise, in sixth place in the standings Ongetta-Rivacold’s veteran Frenchman
Alexis Masbou got the first win of his long career in Brno, only to finish eighth in Great Britain.

Sandwiched between Vazquez and Masbou in the championship table is Romano Fenati (SKY Racing Team VR46) who is 44 points behind Miller, having not won since Mugello. Can the Italian return to winning ways at Misano?

Another Italian rider who could be in contention for maximum points in front of the home fans would be Junior Team GO&FUN Moto3 rookie Enea Bastianini, who claimed his second consecutive podium finish at Silverstone, taking third place. A first victory for him would certainly be popular with the Misano crowd.