John McPhee confirmed to stay with SaxoPrint-RTG for 2015 season 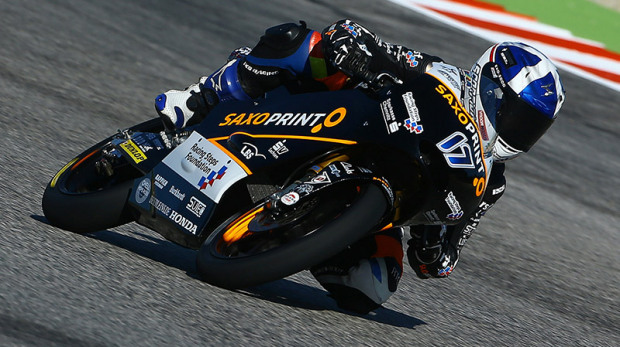 The Racing Steps Foundation has reached agreement at Motorland Aragon for its Moto3 rider John McPhee to continue with the Honda-powered SaxoPrint-RTG squad in the World Championship next year.

It will be McPhee’s third full season in the class with the team.

The Brit – who has secured five top 10 places with the German outfit in the 250cc lightweight class so far this year – has been tasked with delivering regular podium finishes in 2015.

The 20 years-old Racing Steps Foundation protégé said: “I’m delighted to be continuing with the team and Honda next year thanks to continued backing and support from the Foundation.

“Together with SaxoPrint-RTG I’ve been able to make big strides forward this year. And clearly the aim is to continue that progression between now and the end of the season at Valencia in November.

“While the target is regular top three finishes next year you can rest assured I’ll be doing my level best to land my maiden podium before this season is out.”

Welcoming the agreement for McPhee to continue with the squad, SaxoPrint RTG boss Dirk Heidolf said: “Many people do not realise just how competitive this class is.

“We have 32 of the best and fastest riders in the world out there and the fact the John has been up there in the top 10 this season shows what a very good rider he is.

“This year he has improved a lot and hopefully between now and Valencia will improve a lot more. But next year we will be working very hard together to take John to the next level which we know he can do.”