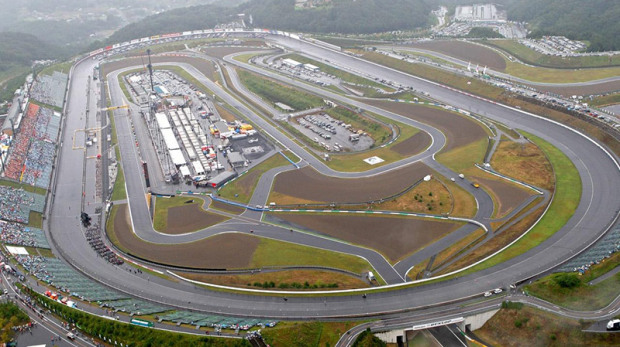 MotoGP™ World Champion Marc Marquez has his first chance to clinch the 2014 premier class title this weekend at round 15 of the season, the Motul Grand Prix of Japan, at Motegi.

The Honda-built twin ring circuit was first added to the World Championship schedule in 1999 and has hosted a Grand Prix event every year since, meaning that this will be the 16th occasion that a GP has been held at the venue. The race weekend marks the commencement of an intense back-to-back triple header with the visit to Japan followed quickly by Grands Prix in Australia and Malaysia.

Although Marquez only managed to finish 13th in Aragon, he did finish one place ahead of his Repsol Honda teammate and closest championship challenger Dani Pedrosa, and in doing so increased his lead in the title chase to 75 points.

Amongst several potential scenarios that would see Marquez retain the title are him winning the race, or finishing second or third, ahead of both Pedrosa and Rossi. The Motegi circuit has twice been the circuit at which the MotoGP world title has been secured, in 2007 (Casey Stoner – Ducati) and 2008 (Rossi – Yamaha), so Marquez has a decent chance of becoming the first Honda rider to secure the crown on the factory’s home territory.

His rivals will all be striving to prevent him from doing so of course. Pedrosa has a good record in Japan as the rider with most GP wins at the Motegi circuit – with four in total, two in MotoGP and two in the smaller classes. Like Marquez, Pedrosa will be aiming to bounce back from a crash at Aragon which cost him significant points.

Rossi is also looking to recover from an Aragon crash, in his case a heavy fall which ended his race and saw him sent to hospital for precautionary scans on his head. The Italian fortunately escaped the accident relatively unhurt and will be pushing for the podium again. Indeed Rossi has finished on the rostrum on nine occasions in the premier class at Motegi, including two victories.

Last year Rossi’s Movistar Yamaha MotoGP teammate Lorenzo became the first rider to win the MotoGP race from pole at Motegi since Loris Capirossi in 2006. Lorenzo arrives in Japan full of confidence following his first win of the season last time out in Spain.

Meanwhile, Ducati Team’s Andrea Dovizioso was another rider to suffer a crash at round 14, though thankfully he too was not injured. Dovizioso felt he could even have fought for victory had he not gone down in the final stages of the Aragon contest which saw his colleague Cal Crutchlow notch his first podium result of the season. Crutchlow has only four rides left with the Italian factory and intends to conclude the season in good form.

Aleix Espargaro (NGM Forward Racing) has had a big couple of weeks, with his first MotoGP podium – at MotorLand Aragon – and the subsequent announcement of his 2015 ride with Suzuki. Espargaro will shoot for at least another top five performance in the Far East but the competition is sure to be as fierce as ever.

As the Moto2™ World Championship participants head east for this weekend’s Motul Grand Prix of Japan it is Tito Rabat who leads the way, with a 33 point advantage at the top of the standings.

Rabat finished second last time out at Aragon and that was a fourth consecutive podium result on the back of three successive victories, which have given him the advantage in the title fight with his Marc VDS Racing Team colleague Mika Kallio who could only manage seventh in Spain.

That was the first non-podium finish for Kallio since Catalunya and the Finn will need to use all the experience he has as he looks to reel Rabat back in starting in Japan, with back-to-back races in Australia and Malaysia also coming up as the season heads towards an intriguing conclusion.

Third in the intermediate class standings as the riders prepare for battle at Motegi is Maverick Viñales, who with his stunning Aragon triumph secured the Rookie of the Year award and subsequently had his exciting 2015 MotoGP™ ride with Suzuki confirmed.

Viñales who is still only 19 years-old, took the 14th victory of his Grand Prix career at Aragon. This is the same number of victories that Marco Melandri achieved whilst still a teenager and only four riders have scored more than 14 GP wins before reaching the age of 20: Marc Marquez (26 wins whilst still a teenager), Dani Pedrosa (21), Valentino Rossi (17) and Jorge Lorenzo (15).

That is impressive company to be keeping and Paginas Amarillas HP 40 rider Viñales could be a contender for another win in Japan.

The likes of Dominique Aegerter (Technomag carXpert), Thomas Luthi (Interwetten Sitag) and Johann Zarco (AirAsia Caterham) should be in the podium hunt, whereas Simone Corsi (NGM Forward Racing) will not return to competition before Valencia due to injury.

Corsi underwent surgery to fix a displaced and open fracture of his left ulna and to repair the tendons of the wrist after crashing at Silverstone and has not yet recovered sufficiently to return to racing. He will again be substituted for at the next three rounds by the 21 year-old French rider Florian Marino.

Tomoyoshi Koyama also gets a substitute ride in Japan as he steps in for Tetsuta Nagashima (Teluru Team JiR Webike) who likewise is still injured.

After a dramatic race in tricky conditions at Aragon, the Moto3™ title battle will continue at this weekend’s Motul Grand Prix of Japan, with Alex Marquez (Estrella Galicia 0,0) now leading the standings by 11 points.

Marquez crossed the line second in Spain – a third consecutive runner-up result – which was enough to see him take over from Jack Miller at the head of the World Championship with four rounds remaining. Marquez was last year’s race winner at Motegi, with the first win of his career.

Red Bull KTM Ajo rider Miller was out of the points at MotorLand Aragon following an incident which saw him clash with Marquez in the early stages of the race and he would dearly love to strike back at Motegi.

Marquez’s Estrella Galicia 0,0 colleague Alex Rins was just off the podium in Spain but remains in the title hunt too, sitting 18 points adrift of his teammate. The forthcoming races at Japan, Australia and Malaysia will go a long way to deciding this year’s title and Rins will aim to use the experience he gathered in last year’s intense fight for the title in the final rounds.

A further 23 points down on Rins is Italian rider Romano Fenati (SKY Racing Team VR46) who was victorious at round 14. The gap between race winner Fenati and second place finisher Marquez at Aragon less than a tenth of a second – the eighth time this year that a Moto3 race has been decided by a margin of less than 0.1s.

Also on the podium in Spain was Danny Kent (Red Bull Husqvarna Ajo), a result which lifted him into the top ten. Kent was the Moto3 Motegi winner in 2012 and is one to watch this weekend.