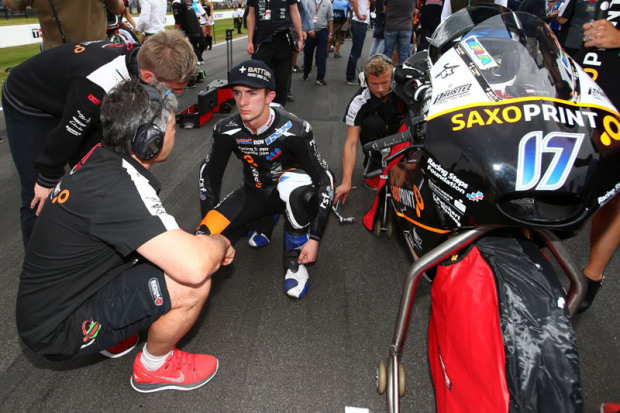 John McPhee – along with teammate Efren Vazquez – just missed the podium at Tissot Australian Grand Prix today. With a brilliant fifth position John confirmed his performances from the practice days and collected important points for the championship.

In the last races of the season it is about to get important points for the championship. The world title has not been awarded yet and the placements are still not assigned. That was clearly noticed in the race, which could not have been more exciting and hard.

John was able to keep his starting position off the grid. The top group, consisting of eleven riders, gave a tough fight the entire race.

Time and time again there was change of leadership and changes of the whole group. Alex Marquez fell back to ninth position, only to return to second again some minutes later.

John rode a very clever race. He stayed out of the tackle and rode consistently with the top group – thereby managing to come so close to the top whilst avoiding further injury to his shoulder. Only at the end did he push forward and secured fifth place.

It was an excellently judged performance by John and he will be eager to continue his strong form next weekend in Malaysia.

John McPhee:
“I´m really really happy. It was a strong weekend, a litte bit difficult at the beginning. My feeling in the race was very good. The rhythm was good. Two strong races at the end of the season. Now we have two more left and I will do my best.”