Frustrating end to 2014 season at Valencia for John McPhee 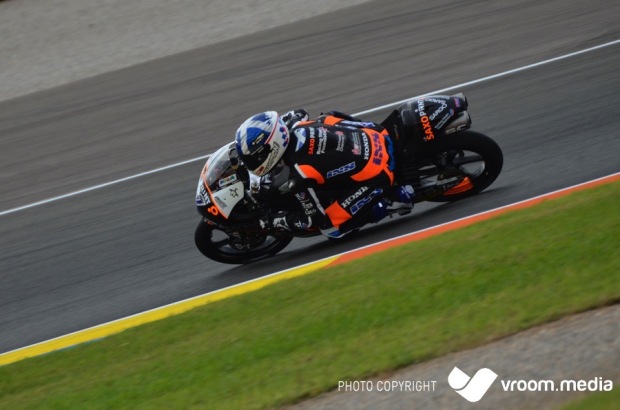 Today’s Moto3 race, the final one of the 2014 season, could hardly be beaten in terms of excitement. Already in the warm up session John’s speed was unbeatable.

The two SAXOPRINT RTG riders had a good start and kept their original starting positions during the first laps. Throughout all 24 laps the fight at the top was tough. No rider was able to break away from the big leading group. The race was marked by constant position changes and hard fights for the first places.

John rode a great race. But affected by bad luck once again, he crashed in the very last corner before the finish line, having been punted off by Niccolo Antonelli. At that time he was riding in seventh place, having been fighting in the leading group all race.

He managed to get his bike going again and finished the race in 17th position, but unfortunately there wasn’t the happy ending to his season that he and the team had hoped for.

John McPhee
“It is really disappointing for me to finish the season like this. But at the end there’s nothing which I could do. I crashed, but it was because of another rider. But at the end we have to look back to a really successful season. I did a good race. I had a good rhythm on the bike and the feeling in the team was very good. Overall I am still happy and I am looking forward to the next season. I want to say thank you to the team for bringing me on so much this year. I hope we can fight on the front next season again. “