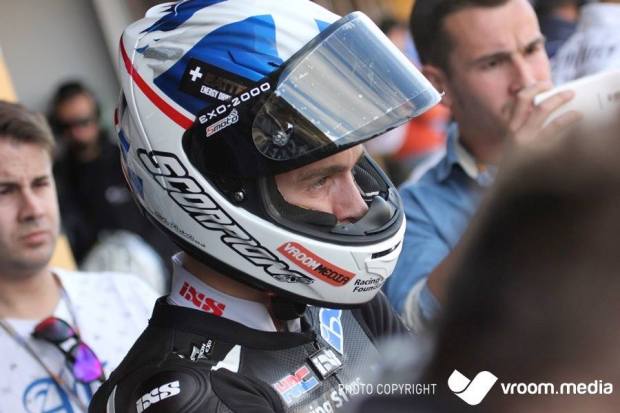 The Circuit de la Comunitat Valencia was dry and sunny but very windy today for both qualifying sessions of the final FIM CEV Repsol Moto3 event of the season. The gusty conditions caught out many of the riders and there were many falls throughout the day. With an entry list of 55, riders were split into two groups for the morning and afternoon sessions with combined results deciding the grid for both of tomorrow’s races.

Whilst the Championship has already been taken by Fabio Quartararo, the remaining top few places will be decided here with the two weekend races giving riders a fight for a potential 50 points. To make the racing even more exciting Moto3GP stars John McPhee and Alexis Masbou are using the event as a test with their Saxoprint RTG team and also the very experienced Moto3GP rider Jasper Iwema returns for another race here.

Local knowledge always comes into play here as many of the Spanish riders use this circuit for extensive testing throughout the year. In the first of the sessions, Group A was headed up by Gabriel Rodrigo (1:40.396) and Fabio Quartararo (1:40.390). British rider Wayne Ryan (1:42.302) was 13th fastest.

Group B saw Jorge Navarro (1:40.565) just ahead of John McPhee (1:40.611) who missed a lot of his session when the team had to change a poorly performing clutch that they were testing. His new team mate for 2015, Alexis Masbou (1:41.340) was sixth in Group A; he too has been working on setting up his bike for his first Saxoprint RTG team event. The other British rider Bradley Ray, who is taking part in the FIM CEV Repsol Championship was 11th in Group B with a time of 1:42.292.

The second qualifying gave mixed results as the gusting wind increased in strength arguably making conditions more difficult. In Group A only eight riders bettered their times and that groups combined times left the top twelve riders positions as they were in the first qualifying. In Group B it was another story and twenty riders managed to improve their times. But when the groups two session times were combined, only four of the top ten changed and the top four remained in the same positions.

When the two qualifying groups were pulled together there were a few surprises for the final grid positions. Gabriel Rodrigo took pole with Jorge Navarro, currently second in the championship beside him. Fabio Quartararo makes up the final place on the front row.

John McPhee heads up the second row and his team mate Alexis Masbou is in 11th position on the fourth row. Hiroki Ohno, currently lying third in the championship is in 15th place and Brits Brad Ray in 26th and Wayne Ryan 27th.

So the grid suggests that the excitement of tomorrow’s races will continue to live up to the tradition of most of the Moto3 events we have seen this year!

To follow our British riders and all of tomorrow’s action here in Valencia, including both the FIM CEV Repsol Moto3 races tune in live to ESPN Channel 512 with live timing at: http://www.circuitvalencia.com/live/index.htm