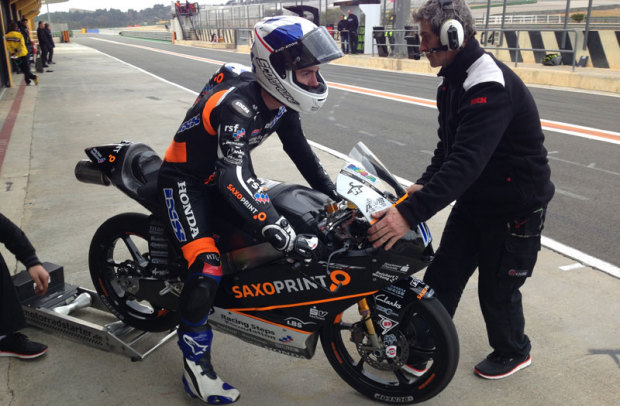 Well, it’s great to get back out on track again after the winter break, although it was a cold and cloudy day here at Valencia for the first Official IRTA test. I spent the winter doing some motoX, general fitness training and, with all the snow up in Scotland, some snowboarding too.

This was my first time out on the SAXOPRINT RTG bike since we ended the season here back in November. Some other teams have already been testing their new bikes before they arrived here, but for us we received the new Honda in a large pile of boxes at the beginning of this week and the guys put them together over the last two days.

I’m still working with Toni, my chief engineer and Frank my mechanic from last year but we have a new young mechanic Simon who has joined us. Peter is still looking after all the computer stuff and data. And my team mate Alexi has a couple of new guys too. So there are a few changes in the SAXOPRINT RTG line up for the New Year.

Team boss Dirk wasn’t able to join us here for this first outing as he had a skiing accident a couple of days ago and needed a check-up and some rest before he comes out; hope he gets well soon!

The new Honda bikes look good, as always, and didn’t feel much different although the regulations have changed the bike for this year. We now have a rev limit of 13,500, down 500rpm from last year’s maximum of 14,000. So we’ve lost a bit of top end and have to review all the gear ratios for each circuit.

There’s a lot of other smaller changes too which HRC have made. I managed about 42 laps today and started to get the feel of things again pretty quickly. However it was cold out there so I didn’t want to go crazy too quickly and bin it big time on day one of a new season. That wouldn’t have gone down too well! Times are pretty meaningless today as for some it’s a day one ‘shake down’ while others have already had a few days on track, so they right back into it.

It was good to meet up with the other riders again in the paddock and find out what everyone’s been up to over winter. It’s really strange because on the one hand it seems like ages since I’ve been out on the bike, but driving up to the circuit it just seems like yesterday we were here last – funny the tricks your mind plays! But one thing I do know is that it was certainly warmer last time we were here! Also there’s a threat of rain tomorrow but I hope it stays clear as we could do with the track time to settle back into things. I’ll keep you posted…