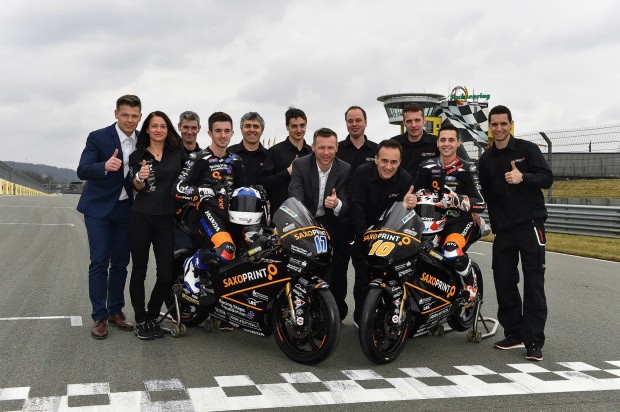 The last few days have been very busy but great fun too!

Firstly I had the SAXOPRINT RTG team presentation at the Sachsenring circuit. We had a press conference during the day and in the evening a party for sponsors.
It was great to meet up with all the team and their sponsors and we were interviewed about the year ahead!
Everything looking positive and making it even more exciting for the first race.

When I left Germany it was straight to the Scottish bike show! I met up with Pole Position Travel there who will be supporting me this season. And also with Duncan and the guys from the Knockhill circuit stand. Duncan had me up on stage and I explained to the audience how things were looking for 2015 and about the testing we’d been doing so far. Had some time with Rory skinner my new RSF team mate who has just joined and will be doing some Spanish races and the RedBull rookies cup this year. Check him out – at 13 years old he’s already on it and shows great promise.

I also met up with Caledonian Clothing to discuss the possibility of producing some McPhee fan clothing – so watch this space!

Alexis and I are getting on well and he has a good sense of humour, which always helps!

I’ve just arrived at the Almeria circuit in southern Spain where we will have a two day test with SAXOPRINT RTG before the last official testing in Jerez next week.

The previous IRTA official tests have been okay but not perfect. The weather at the first  test in Valencia was wet, so we lost time.  But I’m happy to have finished up in 5th overall at Jerez after the three days there, especially as we’re the only honda guys on the 2014 bikes, the other teams all have the new 2015 chassis.

The Almeria weather looks good so I’m looking forward to getting some more track time here and trying some different things with the bike.

Thanks – as always – for all your support!