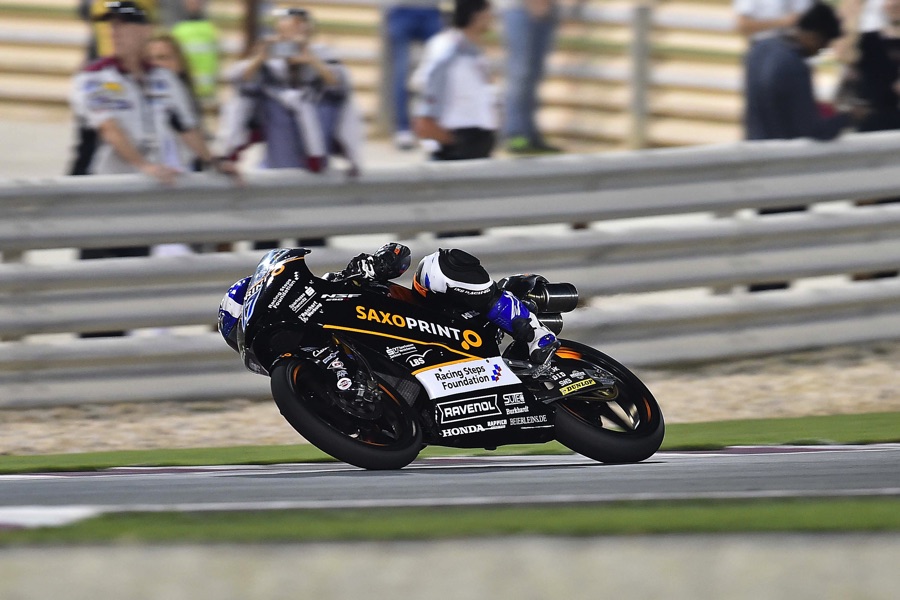 The nail-biting Moto3 race in Qatar proved a great start to the season for John McPhee, with the young Scot finishing in 5th place.

The SAXOPRINT RTG rider started well off the line from his 5th place on the grid – and as Oliveira went off track at turn 1, he ran in 3rd place as the first laps got underway.

As the leading pack shuffled around John found himself in 5th after the first handful of laps and by mid race was on the tail of the leading pack, swapping between 10th and 11th.

With 8 laps to go, fellow Brit Danny Kent in 1st, and with the midfield having closed on the leading group, John moved back into 10th in what had become an extended battle of up to 17 riders.

Two laps later he was shuffled back into 11th again by Andrea Locatelli and with 5 laps remaining had slipped to 13th behind Karel Hanika, with whom he continued to race over the following laps, regaining 11th with 3 laps to go.

As Fabio Quartararo and Efren Vazquez jostled for the lead over the final couple of laps, John held position, still on the tail of the leading group.

Early into the last lap he moved up to 8th, and managed to power his way along the finish straight to finally cross the line in 5th. Even though he never really lost sight of the front throughout the race, the final couple of laps were a spirited recovery and resulted in a position good for both points and self-confidence.

John McPhee:
“I am really happy with the first result of the season. Top 5 is a good position to start 2015 with. And also it is a good team result for SAXOPRINT RTG as the other rider won the race. It was a difficult race for me as I couldn’t manage to handle the bike quite as well as I’d wanted. But at the end it is a very good result and I am very happy.”